Items related to Henderson's House Rules: The Official Guide to...

Henderson's House Rules: The Official Guide to Replacing the Toilet Paper And Other Domestic Topics of Great Dispute 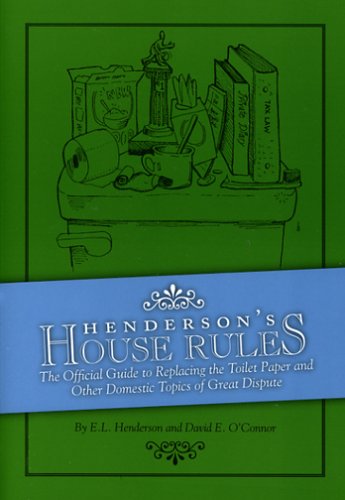 Room by room, Henderson's House Rules takes a humorous yet practical look at all those petty yet contentious household issues, from how to reseal a bag of bread to which way the toilet paper should hang. In a world where compromise is king, only Henderson's dares to say, "This is the rule."

Co-author David E. O'Connor grew up in a family of seven in a three-bedroom, one-bath home (his first introduction to the challenges of shared living space). While serving in the U.S. Army as a young man, he lived with fellow soldiers for six months in barracks and for two-and-a-half years in an isolated seven-person station--which was, aside from its military function, essentially a two-bedroom, one-bath home surrounded by barbed wire.David has shared apartments and houses with various roommates; with his first wife and their child; a second wife; the second wife and the child from the first marriage; and, of course, he has lived alone.After earning a bachelor's degree in English and a master's degree in special education, he later went on to receive his doctorate in law. David is also a certified mediator. As an attorney he has represented landlords, tenants, accused murderers, wives, and husbands. He has published works on education, labor law, legislation, and criminal law, and he has also edited law journals and documents for state government and the United Nations. David is currently a freelance writer and editor in Bozeman, Montana.

He leaves the toilet set up; you leave the cap off the toothpaste. She lets the dog pre-wash the dishes; you clip your toenails in bed...Enter Henderson's House Rules. It's the official rulebook for couples who share living space. Rules? What about the popular advice that compromise and communication are the keys to domestic harmony? Save it for the big stuff. For all those trivial things housemates unwittingly do that drive each other crazy, forget it. You don't need to "work it out" or "talk it over." You need to look up the House Rule.

1. HENDERSON'S HOUSE RULES: THE OFF

2. Henderson's House Rules: The Official Guide to Replacing the Toilet Paper and Other Domestic Topics of Great Dispute