Items related to A Discourse on Boxes of the Sixteenth, Seventeenth...

Conybeare, A.J. A Discourse on Boxes of the Sixteenth, Seventeenth and Eighteenth Centuries

A Discourse on Boxes of the Sixteenth, Seventeenth and Eighteenth Centuries 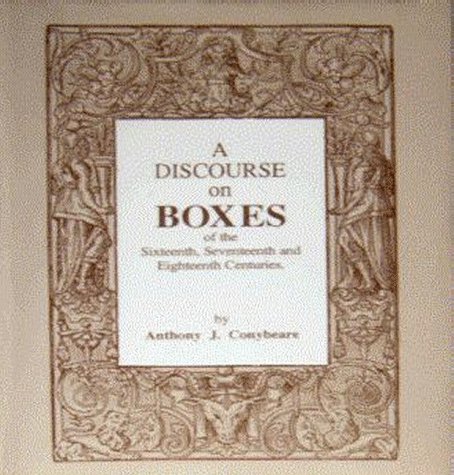 Most books on English Antique Oak furniture are mainly concerned with the larger pieces such as beds, court cupboards, chests, tables and chairs. This is the first book to be dedicated entirely to the small English domestic table boxes and desks of the 16th, 17th and 18th Centuries.

Known almost universally as "Bible" boxes, until recently these delightful little articles of everyday use were virtually ignored by collectors and dealers alike.

The author illustrates fifty-three examples from the 16th to the 18th Centuries, arranged for ease of reference in a chronological sequence, and suggests methods of dating them from an examination of the style of ornament, the timber content, and methods of construction.

He traces the origins of the Classical motifs which decorate many of the early boxes, and reveals a link between embroidery patterns and woodcarving during the post-Restoration period.

Most of the dating techniques demonstrated in this book can also be applied to larger items of carved English oak of the period covered.

"His [Conybeare's] credentials for writing these texts include a passionate interest in Oak furniture from the 16th and 17th centuries, and particularly boxes and desks, of which he has collected, recorded and examined in detail, probably more than any researcher." "Conybeare's book represents the record of a dedicated observer of furniture who comes to the work without the formal reticence about speculation which guides the tutored academic, and in many ways the book has many fresh and intuitively derived themes as a result." -- Bill Cotton, Regional Furniture Society Newsletter, 1994

Had the inventor of The Box been able to take out a patent he would surely have made a fortune. The sheer usefulness of the device is astonishing; where would our present civilisation be without it? At one end of the scale we keep matches in boxes, at the other most of us live in them. Large, medium, or small boxes have served the human race for perhaps ten millennia, and no doubt will continue to do so.

I doubt whether anything is ever invented until a need for it arises, and we can only speculate as to what important event gave rise to the need for the first box, but wood was probably the first malleable raw material to be used by man, and to work with wood it is necessary to have developed tools. In any early culture tools are valued, if not venerated, and I cannot believe that a man with tools would not make a box to keep them in. Once tools could be contained, why not other things?

With the invention of the cleft plank, the box had finally arrived. The need to join wood to wood undoubtedly led to the development of that other useful device, the nail. Invent the chisel and the saw and you are well on the way to the dove-tail joint (much employed in ancient Egypt). Invent the hinge and the lock, and you have taken the box as far as you can along its evolutionary path.

One thing remains to complete the natural history of the box; the decoration.

The human race has always had an extraordinary urge to embellish; given a perfectly good cave wall even prehistoric man discovered a compulsion to decorate it; my parents' generation when given good plain ceilings and walls in their houses could not wait to encrust them with an extraordinary wallpaper which looked as if it had broken out in boils. There has hardly been any period in the development of human culture when decoration of some sort or other has not been applied to otherwise plain surfaces. There appears to be a deep-rooted restlessness about the human spirit which at all ages has led people to decorate everything in sight, from the humblest of their personal possessions to the largest buildings.

Much decoration in early days was symbolic, using devices which carried a message to those who could understand it. The early cave paintings are thought to have had magical significance; the lavish Church decorations of the Middle Ages carried religious messages to people who could not read. Decoration of houses or furniture conveyed the status of the owner.

The carved decoration of the small ordinary domestic boxes in use by the household during the three centuries covered in this book was no different from that used on larger pieces of furniture; we find the same motifs recurring on table-rails, chair backs, court cupboards and beds. When we look at the houses of the period we find them on overmantles, friezes above panelling, and even outside on bargeboards and gables. In the churches they occur on pews, pulpits and screens.

These little decorated boxes have come down to us in considerable numbers, testifying to the robust nature of their construction and to the care of their subsequent owners. For years no serious collector of English oak furniture paid much heed to "Bible Boxes", even thirty years or so ago they tended to pass forlornly from dealer to dealer.

I believe that their image has suffered in the past hundred years from their association with the Victorian custom of using them to contain the family Bible. This was not their original purpose, and (at risk of offending many people) may I suggest that this is the reason for the lack of interest in them for so many years. The word "Victorian" conjures up mental images of sombre furnishings, and dark rooms - black is not a colour which most people want in their homes. When one considers the boxes it seems unfair that these delightful little articles of domestic furniture, so useful to their original owners, should become burdened with a leaden image, and one purpose of this book is to attempt to replace this.

Each of these little boxes is unique in that it was a "one-off"; it would have been technically impossible for the carver to exactly duplicate his work even if he had wanted to do so; equally, the box maker was quite content with constant variations in the dimensions of his work. All the work that went into a box was by hand; mechanical sawing in England was still two hundred years away from the earlier boxes.

These little boxes were made at a time when their makers were drawing on experience gained in the working of wood over countless generations; much of the carving exhibits skill equal to that of the great woodcarvers of Church furniture in the preceding centuries. The quality of some of the work is more remarkable when one considers that it was carried out with the most basic of tools, the shape of which had not changed since Roman times.

Most of the boxes which we encounter today have been excellently cared for by their various owners down through the generations; the patina on many boxes is higher than that on other larger examples of English furniture, due perhaps to them having been polished more frequently as they were conveniently to hand.

Most are still affordable as they have not yet been granted the status to which I believe they are entitled. To my knowledge, it has not yet been profitable to fake them.

Many excellent books have been written in the last hundred years about English oak furniture, but many have only a small section covering these delightful little articles of everyday use. The time has surely come when they deserve a book of their own.

1. A discourse on boxes of the sixteenth, seventeenth and eighteenth centuries