Items related to The Harem Conspiracy: The Murder of Ramesses III

Redford, Susan The Harem Conspiracy: The Murder of Ramesses III

The Harem Conspiracy: The Murder of Ramesses III 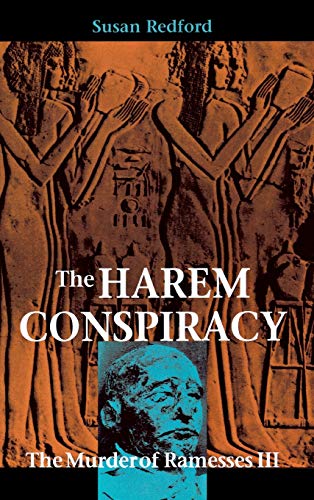 This publication looks at the mysterious events surrounding the death of Rameses III, something that has puzzled historians, archaeologists, and Egyptologists. Now archaeologist Susan Redford investigates the circumstances of the ancient pharoah's death - and discovers among the women of his harem the threads of a murder conspiracy. Evidence is accumulated from ancient papyri and careful readings of temple carvings and a theory involving divisions between clans and rival lineages culminating in a murder plot, is put forward. The work gives insights into ancient Egypt's highly refined legal and judicial systems, which merge abstract notions of equity with mutilation and death. This new eplanation of the harem conspiracy casts new light on crime, punishment, and the role of women in Egyptian society. It further interprets the legacy of the assassination as a contribution to the decline of Egyptian power. A text that aims to ignite interest in both students and the general public, as well as challenging specialists in this field.

"An appealing reconstruction, vivid and convincing.... This book will prove irresistible to enthusiasts of ancient Egypt." - Choice "A superb study of an intriguing topic." - Richard H. Wilkinson, author of Symbol and Magic in Egyptian Art "An educational and enjoyable venture into the intrigue and mystery of the times." - The Scroll"

Susan Redford, a research affiliate of Pennsylvania State University, directs the Theban Tomb Survey in the Valley of the Nobles at Luxor. She lives with her two sons and her husband, Donald, in State College, Pennsylvania.

1. The Harem Conspiracy: The Murder of Ramessess III