Items related to Nationalism in Ireland 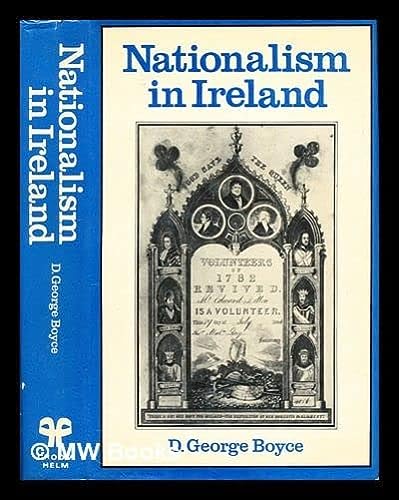 Based on extensive historical, literary and political research, "Nationalism in Ireland" examines the relationship between ideas and political and social reality. It explains why the aspirations of Irish nationalism have failed to modify the facts of Irish political conflict and sectarian division. For this revised edition, Professor Boyce has added a new final chapter which considers the current historiographical debate and the development of Irish nationalism in the last decade. This book should be of interest to students and teachers of history, politics and Irish studies.

'It will satisfy the student and stimulate the general reader seeking a full understanding of the national struggle in one of the first countries to throw off Britain's imperial rule.' – David Harkness, Professor of Irish History, Queen's University, Belfast

'The idea, fashionable for a generation after 1945, that the era of nationalism is over has suddenly begun to appear quaint. This makes a second edition of Boyce's book particularly appropriate.' – Tom Garvin, Professor of Politics, University College, Dublin in Irish Historical Studies, 1994

'... his careful, well-written and structured analysis and synthesis of most of the best in a rapidly expanding Irish historiography qualifies his book as the best on the subject.' – Lawrence J. McCaffrey

'The book will be an essential addition to any student's work on Ireland, analysis of the ingredients which form nationalism.' – Scottish Association of Teachers of History Resources Review

'Boyce's Nationalism in Ireland is in every sense an original and scholarly contribution to a long discussed and controversial subject. There is no study quite like it.' - CHOICE

Boyce examines the relationship between ideas and political and social reality. A new final chapter considers the development of nationalism in both parts of Ireland, and places the phenomenon of nationalism in a contemporary and European setting

Book Description Hardback. Condition: Very Good. The book has been read, but is in excellent condition. Pages are intact and not marred by notes or highlighting. The spine remains undamaged. Seller Inventory # GOR009887306

Book Description Johns Hopkins Univ. Press, 1982. Condition: Good. First Edition. Former Library book. Shows some signs of wear, and may have some markings on the inside. Seller Inventory # GRP58599488

Book Description Croom Helm Ltd, 1982. Condition: Good. This is an ex-library book and may have the usual library/used-book markings inside.This book has hardback covers. In good all round condition. Please note the Image in this listing is a stock photo and may not match the covers of the actual item,600grams, ISBN:0856647055. Seller Inventory # 6897203