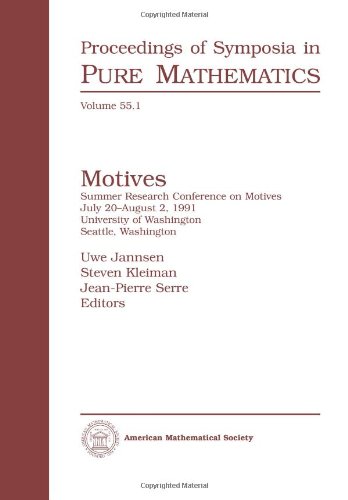 Motives were introduced in the mid-1960s by Grothendieck to explain the analogies among the various cohomology theories for algebraic varieties, to play the role of the missing rational cohomology, and to provide a blueprint for proving Weil's conjectures about the zeta function of a variety over a finite field. Over the last ten years or so, researchers in various areas--Hodge theory, algebraic $K$-theory, polylogarithms, automorphic forms, $L$-functions, $\ell$-adic representations, trigonometric sums, and algebraic cycles--have discovered that an enlarged (and in part conjectural) theory of ``mixed'' motives indicates and explains phenomena appearing in each area. Thus the theory holds the potential of enriching and unifying these areas. This is one of two volumes containing the revised texts of nearly all the lectures presented at the AMS-IMS-SIAM Joint Summer Research Conference on Motives, held in Seattle, in 1991. A number of related works are also included, making for a total of forty-seven papers, from general introductions to specialized surveys to research papers.