Items related to A Fire Upon the Deep: 1 (Zones of Thought, 1) 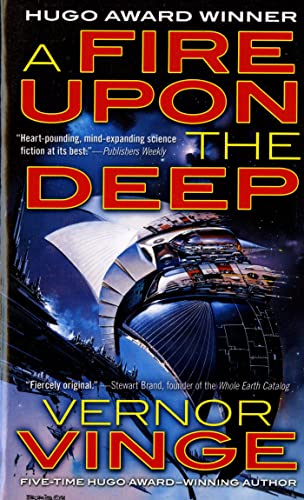 A Fire Upon the Deep is the big, breakout book that fulfills the promise of Vinge's career to date: a gripping tale of galactic war told on a cosmic scale. Thousands of years hence, many races inhabit a universe where a mind's potential is determined by its location in space, from superintelligent entities in the Transcend, to the limited minds of the Unthinking Depths, where only simple creatures and technology can function. Nobody knows what strange force partitioned space into these "regions of thought," but when the warring Straumli realm use an ancient Transcendent artifact as a weapon, they unwittingly unleash an awesome power that destroys thousands of worlds and enslaves all natural and artificial intelligence. Fleeing the threat, a family of scientists, including two children, are taken captive by the Tines, an alien race with a harsh medieval culture, and used as pawns in a ruthless power struggle. A rescue mission, not entirely composed of humans, must rescue the children-and a secret that may save the rest of interstellar civilization. A Fire Upon The Deep is the winner of the 1993 Hugo Award for Best Novel.

In this Hugo-winning 1991 SF novel, Vernor Vinge gives us a wild new cosmology, a galaxy-spanning "Net of a Million Lies", some finely imagined aliens, and much nail-biting suspense.

Faster-than-light travel remains impossible near Earth, deep in the galaxy's Slow Zone--but physical laws relax in the surrounding Beyond. Outside that again is the Transcend, full of unpredictable, godlike "Powers". When human meddling wakes an old Power, the Blight, this spreads like a wildfire mind virus that turns whole civilisations into its unthinking tools. And the half-mythical Countermeasure, if it exists, is lost with two human children on primitive Tines World.

Serious complications follow. One paranoid alien alliance blames humanity for the Blight and launches a genocidal strike. Pham Nuwen, the man who knows about Countermeasure, escapes this ruin in the spacecraft Out of Band--heading for more violence and treachery, with 500 warships soon in hot pursuit. On his destination world, the fascinating Tines are intelligent only in combination: named "individuals" are small packs of the dog-like aliens. Primitive doesn't mean stupid, and opposed Tine leaders wheedle the young castaways for information about guns and radios. Low-tech war looms, with elaborately nested betrayals and schemes to seize Out of Band if it ever arrives. The tension becomes extreme... while half the Beyond debates the issues on galactic Usenet.

Vinge's climax is suitably mind-boggling. This epic combines the flash and dazzle of old-style space opera with modern, polished thoughtfulness. Pham Nuwen also appears in the nifty prequel set 30,000 years earlier, A Deepness in the Sky. Both recommended. --David Langford

"Fleeing a menace of galactic proportions, a spaceship crashes on an unfamiliar world, leaving the survivors--a pair of children--to the not-so-tender mercies of a medieval, lupine race. Responding to the crippled ship's distress signal, a rescue mission races against time to retrieve the children and recover the weapon they need to prevent the universe from being changed forever. Against a background depicting a space-time continuum stratified into 'zones of thought, ' the author has created a rarity--a unique blend of hard science, high drama, and superb storytelling." --Library Journal

"A tale that burns with the brazen energy of the best space operas of the golden age. Vinge has created a galaxy for the readers of the '90s to believe in...immense, ancient, athrum with data webs, dotted with wonders." --John Clute, Interzone

"The first grand SF I've read in ages...Vinge is one of the best visionary writers of SF today." --David Brin, author of Earth

"Fiercely original...Compelling ideas in the book include problems and advantages of group mind, galactic communications turbidity, and the prospect of civilizations aspiring to godhood." --Stewart Brand, founder of the Whole Earth Catalog

A Fire Upon The Deep

A Fire Upon the Deep (Paperback or Softback)

A Fire Upon The Deep Format: Paperback