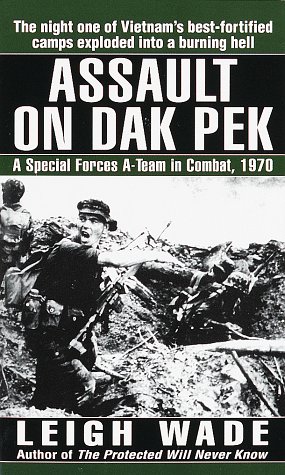 A member of the Special Forces in Vietnam chronicles the battle between the forces' A-Team and the Vietcong for control of Dak Pek, a highly fortified base, over several weeks in 1970, in a tale of carnage and courage. Original.

Leigh Wade was born in Perry, Oklahoma, in August 1942. His father was a professional army officer, and the family moved around a lot. Leigh joined the army in 1961, a week after he graduated high school. He spent most of the next ten years with Special Forces units in Southeast Asia. He left the army in 1971 but returned in 1982. He retired a sergeant first class in 1992. He is also the author of Tan Phu: Special Forces Team A-23 in Combat and The Protected Will Never Know. He has two sons and a daughter and lives with his younger son in Tucson.

In the early hours of April 12, 1970, the NVA brutally attacked the Special Forces A-team camp at Dak Pek, seizing more than half the base--including the high ground and its 106mm recoilless rifle--plus the surrounding valley and mountains. Twenty kilometers south, at Dak Seang, another huge concentration of NVA was attempting to overrun the Special Forces camp there.

Now it was time for the Americans to fight back.

With gritty honesty, SF veteran--five tours in Vietnam and Thailand--Leigh Wade recounts the weeks of carnage, courage, and sacrifice in which the men of Dak Pek carried out bunker-to-bunker mop-up operations and heroic uphill counterattacks to reclaim their base. With hundreds of corpses littering the camp, it was truly a fight to the death--a fight that proved just what Americans are made of. . . .