Items related to Golf Courses: Fairways of the World

Golf Courses: Fairways of the World 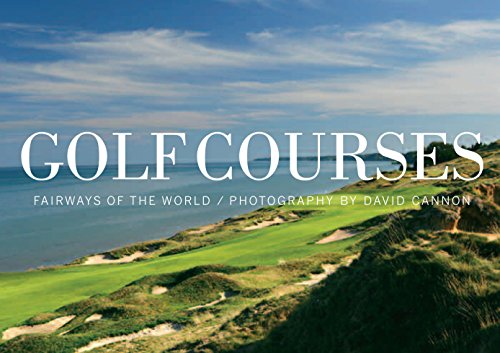 Photographer David Cannon began his career in sports photography twenty-five years ago and is considered the premier golf photographer in the world. Having played at more than seven hundred golf courses in over fifty countries, Cannon photographs with a true golfer's eye, offering an extraordinary window into some of the world's most celebrated courses--with more than 40 in North America, dozens in Asia and the South Pacific, and several in both Africa and the Middle East. Savor a view from the 11th hole of the incomparable and historic St. Andrews's Old Course bathed in golden afternoon light; glimpse giraffes and elephants from any green at Leopard Creek, South Africa; vicariously experience Pirate's Plank, the harrowing 15th hole at Cape Kidnappers, New Zealand, which is set at the very end of the clifftop fairway surrounded by dramatic 500-foot drops to the ocean; and take in the serene sea view from the signature 18th hole of the very private Seminole Golf Course in Florida. Golf Courses stunningly captures the singular genius and beauty of golf courses. It is a comprehensive collection of the world's best courses by revered designers including Donald Ross, Pete Dye, and Robert Trent Jones, Sr., and such new talent as Steve Smyers and Tom Doak, among many others--all of whom skillfully orchestrate the exceptional union of nature and course design on five continents. This deluxe, limited-edition volume features over two hundred sumptuous color photographs of courses, some of which have never been photographed or published previously, in full spreads and gatefolds--some measuring over five feet in length--and includes a numbered print signed by the photographer. Golf Courses: Fairways of the World will be strictly limited to 5,000 copies.

"This pictorial journey across 80 golf courses around the globe is the ideal fantasy playground for the golf aficionado. Sports photographer David Cannon captures courses that range from oceanside to marshy to mountains, and the perspective on these green panoramas is enough to make any golfer pack his bags--and his clubs." Palm Beach Illustrated

"Cameron is the official shuttermeister for the Royal and Ancient Golf Club of St. Andrews, so he had access to some not-so-easy-to-get-into courses, like Pine Valley and Seminole." Quest

"Photographer David Cannon began his career in sports photography 25 years ago and is considered the premier golf photographer in the world. Having played more than 700 courses in over 40 countries, Cannon photographs with a true golfer's eye, offering an extraordinary window into some of the world's most celebrated courses." Rosewood About the Author:

David Cannon is an official photographer for the Royal and Ancient Golf Club of St. Andrews, and his Getty Images photography team works directly with the PGA of America, the European and Australian PGA tours, and the LPGA. His work has frequently appeared in such publications as Sports Illustrated, Golf Digest, Time, Newsweek, and all leading golf magazines. He has photographed several of the legendary golfers in the world, including Ernie Els, Tiger Woods, Phil Mickelson, Nick Faldo, Jack Nicklaus, Greg Norman, Arnold Palmer and many others. He lives in Sussex, England. Ernie Els has been one of the top professional golfers in the world since the mid-1990s. He is nicknamed "The Big Easy" for his fluid, seemingly effortless golf swing. Sir Michael Bonallack is the former Secretary of Royal and Ancient Golf Club of St. Andrews, which is responsible for setting the rules and regulations in partnership with the USGA. Steve Smyers is a celebrated landscape architect and scratch golfer.

2. Golf Courses: Fairways of the World

3. Golf Courses: Fairways of the World

4. Golf Courses: Fairways of the World

5. Golf Courses: Fairways of the World

6. Golf Courses: Fairways of the World

7. Golf Courses;Fairways of the World

8. Golf Courses: Fairways of the World

Book Description PAPERBACK. Condition: New. Book Cover and ISBN may be different from US edition but contents as same US Edition. Excellent Quality,Quick delivery, We may ship the books from Asian regions for inventory purpose. Our courier service is not available at PO BOX. Seller Inventory # nt_9780789322395

9. GOLF COURSES: FAIRWAYS OF THE WO