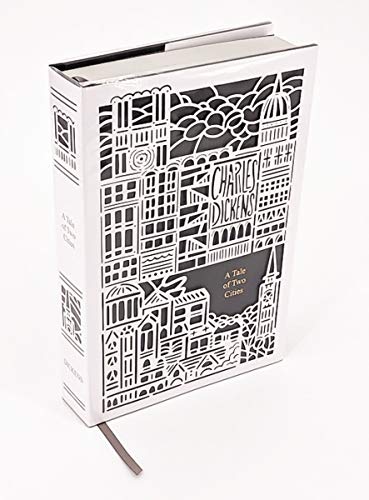 A fine, exclusive edition of one of literature's most beloved stories. Featuring a laser-cut jacket on a textured book with foil stamping, all titles in this series will be first editions. Only 10,000 copies will ever be printed, and each will be individually numbered from 1 to 10,000. "It was a dark winter day, and what with the shadows within, and what with the shadows without, he could but dimly discern the others who were brought there to have their arms bound. Some were standing; some seated. Some were lamenting, and in restless motion; but these were few. The great majority were silent and still, looking fixedly at the ground." - A Tale of Two Cities, Charles Dickens After eighteen years as a political prisoner in the Bastille, the aging Dr. Manette is finally released and reunited with his daughter in England. However, there he meets two very different men, connected through their love for Lucie Manette. From London, they are all drawn against their will to Paris at the height of the Reign of Terror and soon fall under the lethal shadow of La Guillotine. A Tale of Two Cities (Seasons Edition -- Winter) is one of four titles available in October 2019. The winter season will include Little Women, Wuthering Heights, Pride and Prejudice, and A Tale of Two Cities.

Book Description Hardcover. Condition: Good. Connecting readers with great books since 1972. Used books may not include companion materials, some shelf wear, may contain highlighting/notes, may not include cdrom or access codes. Customer service is our top priority!. Seller Inventory # S_320240357

Book Description Hardcover. Condition: Fine. Dust Jacket Condition: Fine. 1st Edition. A Tale of Two Cities by Charles Dickens, Seasons Edition - Winter 2019. Limited Edition of 10,000 numbered copies. Published by Thomas Nelson. First printing, thus. The dust jacket is Fine. I don't see any issues. Note: I did not remove the plastic cover and the dust jacket to look at the book itself. The plastic cover is wrinkled (see third picture). If you would like additional pictures of the book, please let me know. The book will be sent priority mail, insured. Please note that the book may take longer than in the past to arrive, USPS has been very slow. Gift quality Beautiful copy. Seller Inventory # 000292