Items related to In Ishmael's House: A History of Jews in Muslim...

Gilbert, Sir Martin In Ishmael's House: A History of Jews in Muslim Lands

In Ishmael's House: A History of Jews in Muslim Lands 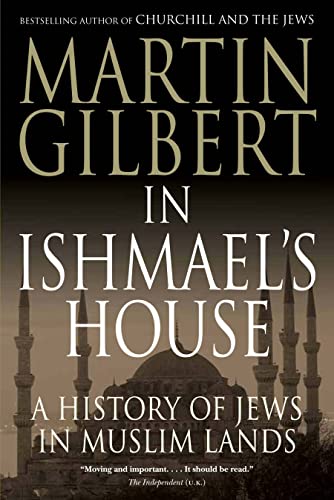 From one of the most popular historians writing today comes a book as fascinating as the bestsellers of Karen Armstrong and Reza Aslan.

In this captivating chronicle, Martin Gilbert shines new light on a controversial dilemma in the modern world: the troubled relationship between Jews and Muslims. Beginning at the dawn of Islam and sweeping from the Atlantic Ocean to the mountains of Afghanistan, Gilbert presents the first popular and authoritative history of Jewish peoples under Muslim rule. He confronts with wisdom and compassion the stormy events in their dramatic story, including anti-Zionist movements and the forced exodus to Israel. He also gives special attention to the twentieth century and to the current political debate about refugee status and restitution. Throughout, Gilbert weaves a compelling narrative of perseverance, struggle, and renewal marked by surprising moments of tolerance and partnership. A monumental and timely book, Jews under Muslim Rule is a crowning achievement that confirms Martin Gilbert as one of the foremost historians of our time.

"This is a book for those who want on their shelf, ready to hand, the facts on the Jews in Muslim lands, from the days of Mohammad himself, a vivid chapter as related here, to the Arab-Israel conflict of the present day. With Sir Martin Gilbert's excellent maps and clear readable prose, this saga is both a reliable source and a pleasure to read."
-- Herman Wouk

"In this epic examination, celebrated historian Gilbert (the six-volume biography of Winston Churchill) explores the evolution of Judaism and Islam. . . . .with a comprehensive yet accessible approach."
-- Publishers Weekly "Sir Martin Gilbert's In Ishmael's House, perhaps for the first time, makes accessible to a mass readership the neglected history of Jews in Muslim lands, from Afghanistan to Morocco."
-- The JC.com "[This book's] account of the slow-burning tragedy of the extinction of Jewish communities in the Arab world is moving and important. It should be read."
-- The Independent About the Author:

SIR MARTIN GILBERT is the author of eighty-two books. He is Winston Churchill's official biographer and a leading historian of the modern world. In 1995 he was knighted "for services to British history and international relations," and in 1999 he was awarded a Doctorate of Literature by the University of Oxford for the totality of his published work. In 2009 he was made a Privy Councillor (as The Rt. Hon. Sir Martin Gilbert) and a member of the British Government's Iraq War Inquiry. He lives in London, England, with his wife Esther.