Items related to Trust No One

Teresa Cooper Trust No One 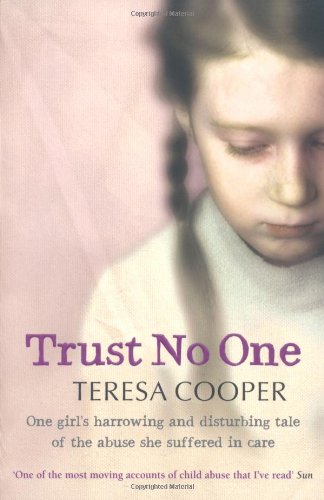 Paperback. Pub Date: May. 2008 Pages: 298 Publisher: Orion Publishing Group. Limited. Thrust into state CARE at 6 months of age because of an Alcoholic father and mentally person who ill Mother. Teresa Cooper spent aN unsettled childhood in a variety of Children's homes . At age 13. she was sent to Kendall House in Gravesend. Kent. a home which soon became her prison and worst nightmare. Teresa found herself a victim of a terrible regime: she was injected with dangerously high doses of drugs and sexually abused. As a result of this cruel and vicious treatment-accompanied by punishments such as 163 days spent in solitary confinement-it was not long before Teresa began to harm herself and even attempt to take her life. After three years of hell. Teresa thought her nightmare was ...

The extraordinary story - which was featured regularly in the media - of how a young girl fought against the most evil of abuses in a care system that was meant to protect her to become the survivor she is today.