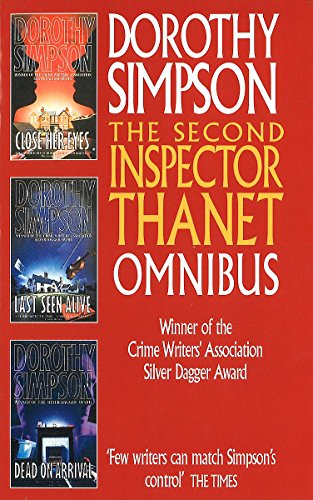 Wellrounded characters, a satisfying mindteaser, the best of British (The TIMES)

CLOSE HER EYES: When Charity Pritchard goes missing Inspector Thanet's concern deepens when the first thought of her strictly relgious family is to leave the matter in God's hands. Of course, no detective can put much faith in appearance, but it is only after Thanet finds Charity's broken body before he realises just how wrong he can be...LAST SEEN ALIVE: It was all of twenty years since Alicia Parnell last saw Sturrenden. While she was still a schoolgirl a jilted boyfriend had killed himself, and her parents had tactfully moved away. Nevertheless the old crowd were delighted to welcome her back when she turned up out of the blue one day- but puzzlement at her motive is quickly replaced by shock, when Alicia is found strangled in her room...DEAD ON ARRIVAL: Life has been rough on Steven Long. Separated from his wife, estranged from his family except his twin brother, he had become a loner. But on the night he died from a savage blow to the back of the head, he'd had an unusual number of visitors. All that was certain was that the murderer had been exceptionally cool and calculated about this particular crime...