Items related to Waiting for the Man: Story of Drugs and Popular Music

Shapiro, Harry Waiting for the Man: Story of Drugs and Popular Music

Waiting for the Man: Story of Drugs and Popular Music 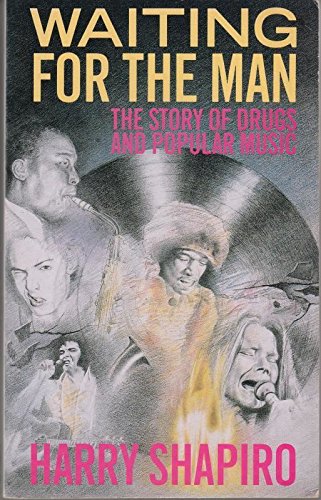 In this book Harry Shapiro examines the time-honoured association between drugs and popular music. He begins with a brief discussion of Western drug-taking before drugs were made illegal in America by the Harrison Narcotics Act of 1914, but the twin rise of jazz and marijuana in the early 1920s heralds the real start of his survey. Each development in popular music has brought with it a new fashion in drugs; Shapiro catalogues these trends and relates them to sociological factors such as race, class and society's attitude towards musicians. He tells in detail the stories of many famous victims of drug abuse, from Charlie Parker to Sid Vicious, and provides evidence of collusion between the drugs and music industries. Shapiro also examines contemporary press accounts of well-known drug arrests, such as those of the Rolling Stones and Boy George, and considers with some irony the 1980s phenomenon of pop stars crusading against drug abuse. Throughout it all, organized crime plays an intermittent but sinister part.

"One of the twenty greatest music books of all time." -- BBC's Music for the Millennium, December 1999

Updated classic study of macabre links between drugs and pop
Drugs and pop have been inextricably intertwined since marijuana and jazz flourished in mob-controlled 1920s prohibition speakeasies. Shapiro documents the origins and progress of each new development in drugs and pop and tells in detail the stories of music's most famous drug casualties - Bird, Hendrix, Morrison, Moon, Vicious et al - while examining the collusion of the billion dollar record industry. First published in 1988, this edition is fully revised and now covers the rise of crack and rap, ecstasy and the dance culture and the return of the wasted junkie rock star.

1. Waiting for the Man: Story of Drugs and Popular Music

Book Description Mandarin 06/09/1990, 1990. Paperback. Condition: Very Good. Shipped within 24 hours from our UK warehouse. Clean, undamaged book with no damage to pages and minimal wear to the cover. Spine still tight, in very good condition. Remember if you are not happy, you are covered by our 100% money back guarantee. Seller Inventory # 6545-9780749302078

2. Waiting for the Man: Story of Drugs and Popular Music

Book Description -. Paperback. Condition: Very Good. Waiting for the Man: Story of Drugs and Popular Music This book is in very good condition and will be shipped within 24 hours of ordering. The cover may have some limited signs of wear but the pages are clean, intact and the spine remains undamaged. This book has clearly been well maintained and looked after thus far. Money back guarantee if you are not satisfied. See all our books here, order more than 1 book and get discounted shipping. Seller Inventory # 7719-9780749302078

3. Waiting for the Man: Story of Drugs and Popular Music

Book Description Paperback. Condition: Very Good. The book has been read, but is in excellent condition. Pages are intact and not marred by notes or highlighting. The spine remains undamaged. Seller Inventory # GOR001923757

4. Waiting for the Man

Book Description Mandarin, 1990. Paperback. Condition: Good. Connecting readers with great books since 1972. Used books may not include companion materials, some shelf wear, may contain highlighting/notes, may not include cdrom or access codes. Customer service is our top priority!. Seller Inventory # S_240745006