Items related to The Momo Cookbook: A Gastronomic Journey Through North...

The Momo Cookbook: A Gastronomic Journey Through North Africa 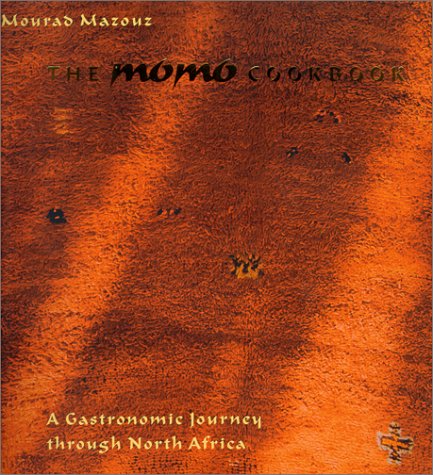 Among the many new restaurants of recent years, Momo is quite simply unique. Mourad Mazouz (otherwise known as Momo) has drawn upon his Algerian background and his extensive knowledge of North African food and culture to create an extraordinary place -- a little fragment of a North African souk dropped into central London. Now Mourad Mazouz has applied his talents and experience to producing an equally inventive and original cookbook. His ambition is to open a door to North Africa, to introduce readers to its cuisine and customs. Cooking in North Africa is an art beyond the simple process of preparing food. It is the art of taking time to live, the art of taking time to do what needs to be done. The Momo Cookbook contains ninety authentic recipes from Morocco, Tunisia and Algeria, including some of the region's most characteristic and delicious dishes: tagines, couscous, briks and briouats, gazelle horns (delicately shaped almond pastries) and refreshing mint tea. As well as recipes, stunning photography evokes the romance and mystery of the region -- its colours, images, traditions and rituals, while award-winning writer, Janine di Giovanni, contributes prose-portraits of the land, the people, their customs and their legendary hospitality.

Roasted meats seasoned with precious saffron underlaid with the pungent notes of cumin, cinnamon, and turmeric, marinated fish snuggled in a bed of almonds, pickled lemon and couscous, simultaneously sweet and piquant salads, delicate and sugary pastries flavoured with fragrant orange-blossom water, dripping with honey and served with a fresh rinse of mint tea. What more proof could there be that food for the body should be food for the soul? Small wonder that the worshippers of sensual culinary delights have anointed Momo one of the most successful new restaurants in recent years, for vibrantly conjuring up the atmosphere of a North African souk right in the heart of London.

The Momo Cookbook is much more than a recipe collection. Prose portraits of the land of the Maghreb (Morocco, Tunisia and Algeria) connect its rich history to the development of a distinctive cuisine which, over the centuries, has been influenced by Jewish, Arabic, Italian and Spanish culture. Stunning location photographs bring the colourful landscape, its traditions and people to life.

But the meat of the book is, of course, the food. The 90 recipes open a door to North Africa and fortunately the ingredients do not cost the price of a return flight: lots of vegetables, fruits, cereals, meats, fish and poultry which, with the artful use of spices, herbs and fragrant waters, are transformed into marvels. Momo himself identifies traditional recipes (such as mechouia, a roasted pepper and tomato salad, harira, a rich and thick soup made with cereal, and briouats stuffed and fried pastry parcels) as well as modern dishes created in the restaurant (such as fillet of John Dory with confit aubergines and polenta, dried fruit salad with aromatic spices, and boureks of crispy vegetables) yet easily prepared in a home kitchen, such as the one dish tagines. Although some of the more exotic ingredients such as orange-blossom water may need searching out if you don't live in a large multi-cultural city, there are helpful and surprisingly easy methods to prepare such ingredients as pickled lemons and almond milk, as well as a full glossary and meal plans. A doorway to a land where sugar and salt, spice and honey ride together happily will always serve up pleasure, whether on the coffee table or the kitchen counter.--Fiona Buckland

Algerian-born Mourad Mazouz is passionate about North African food and cooking. He has created several phenomenally successful Moroccan restaurants, including Momo and Momo Restaurant Familial in London and 404 and Andy Wahloo in Paris. He is also one of the owners of the fashionable Club Gascon. In 1999 he opened the Mo Tearoom and Bazaar, which acts as both a bazaar selling North African artefacts and as a traditional tearoom selling kemia (North African tapas), pastries and shishas (hookah pipes). In 2003 Mourad Mazouz launched Momo at Selfridges, which includes Momo restaurant, selling a mixture of modern and eclectic dishes, Tearoom, Smoking Tent and Boutique. All four spaces combine a North African theme with a more modern twist, selling custom made furniture, fixtures and fittings. Momo at Selfridges is open 7 days a week during shop hours.