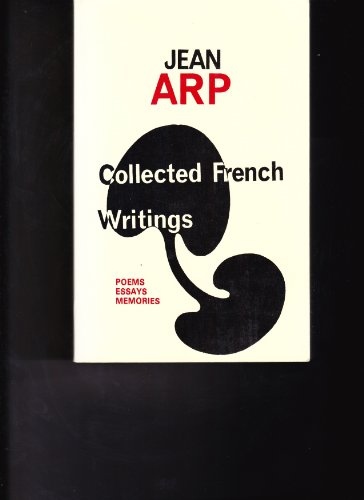 Jean (or Hans) Arp, an important and influential figure of the surrealist movement and dadaism, is better known for his sculpture, paintings and drawings than his writings - but as Sir Herbert Reed has pointed out, "the poetry of Arp is inseperable from his plastic work and a full understanding of his genius and development must take into account both arts". Jean Arp expressed himself in poetry throughout his life and it is an essential part of his oeuvre.

Born in Alsace in 1887, Arp was bilingual from childhood; this volume is based on a French anthology, "Jours Effueuille", which was published in 1965 and was edited by Marcel Jean, with Arp's collaboration. Constant references have been made to Arp's original German writings in the preparation of this edition and exhaustive bibliographical notes have been added. There is also a memoir by the artist's widow, an introduction by Marcel Jean and numerous examples of Arp's book illustrations.

Arp emerges from this volume as a poet of highly individual and varied imaginitive power. These writings are imbued with simplicity, directness an organic vitality and above all humour - the essence of dadaism. Brilliantly translated by Joachim Neugroschel, the book represents the whole range of Arp's writing - from nonsense poems and amusing narratives to penetrating essays on art and artists. It offers us an unusually detailed and accurate documentary, not only of Arp's own life, but of the artistic intelligence and history of the modern movement as well.

First published in Britain in 1974, this new edition once again makes available an important literary classic of modernism. The significance of surrealism over the last half-century is now universally recognised as one of the most important influences in expanded creativeness and use of the imagination - in spite of the "dumbing-down" and philistinism which has invaded our culture at the turn of the new millennium.

One of the major sculptors and painters of the 20th century, but also a writer and a poet who was involved in several of the most important movements in European art. He was born in Strasbourg in 1886, then under German rule, and studied at the Strasbourg School of Arts and Crafts, at Weimar (1905-7) and the Academie Julian, Paris (1908).

In 1912 he went to Munich where he knew Kandinsky and exhibited semi-figurative drawings at the second Blaue Reiter (The Blue Rider) exhibition in 1912 - a loose association of German Expressionist artists with revolutionary aims. In 1913 he exhibited with the Expressionists at the first Herbstsalon (Autumn Salon) in Berlin.

In 1916 he became one of the founder members of the Dada movement in Zurich, with the film maker Hans Richter and the Romanian poet Tristan Tzara. He participated in the Berlin Dada exhibition of 1920, and in 1923 he visited Schwitters in Hanover. The Dadaist movement was characterised by a spirit of anarchic revolt against traditional values. It arose from a mood of disillusionment engendered by the first world war and concentrated itself on "inventing ways of giving the bourgeois insomnia". This protest of poets against the traditional chatter of the bourgeoisie acquired an explosive force and spread throughout Europe inciting political and cultural revolution.

During the Dada era, Arp and his companion Sophie Taeuber executed compositions based on rectangles and squares ('Cercle et Carré') arranged by the "Law of chance" and collages using elements cut out by a book trimmer ('Abstraction Création'). Meanwhile his early book of German Poems 'Die Wolkenpumpe' ('The Cloud Pump') and 'Der Vogel Selhdritt' ('One Bird in a Tree'), revealed a typically dadaist poetry which Arp called `poésie concréte'. Ahead of its time it was already Surrealist automatic poetry transcribed directly, unreflected and uncorrected.

During the 1920's he became associated with the Surrealist movement, closely related to dada, participating in the first Surrealist exhibition in 1925. He lived in a studio in Montmartre near Miró and Ernst, and he frequented the Surrealist meetings in cafés on Place Blanche. Arp, who had voiced his admiration for the poetry of Breton and Eluard, admitted that it was to the Surrealists that his poetic writings "were closest".

Arp visited the USA in 1949 and 1950, and completed a monumental wood and metal relief for Harvard University, and a mural relief for the UNESCO Building in Paris in 1958. He won the international prize for sculpture at the Venice Biennale in 1954. Up until his death in Basel 1966, he lost none of his creative vigour or his creative spirit.