Items related to In and Out of the Mind: Greek Images of the Tragic...

Padel, Ruth In and Out of the Mind: Greek Images of the Tragic Self

In and Out of the Mind: Greek Images of the Tragic Self 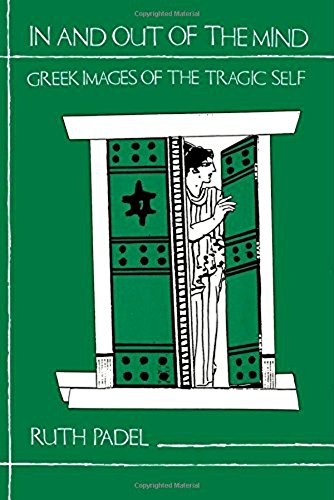 One of Choice's Outstanding Academic Titles for 1992
"A rich and brilliant study.... [Padel] helps us to see not just that Greek ways of thinking are so profoundly alien, but also how they make sense and could be coherently lived. Her skill as a writer ... make[s] those foreign patterns of thought compellingly vivid."--Malcolm Heath, The Times Literary Supplement

"Unfamiliar connections and perspectives will make [this] book important for professionals, and the vivid portrayal of an intense and exotic mental world will appeal to the serious general reader."--Jasper Griffin, The New York Review of Books

"An intriguing book.... Padel ranges widely over the medical writers, epic, comedy, and philosophy. She fortifies and enriches her arguments with the work of scholars in anthropology, psychology, and religion.... A poet herself, she is very sensitive to the possibilities and associations of language."--Michael R. Halleran, Bryn Mawr Classical Review

"Ruth Padel's close reading of the language of the extant plays will be helpful to scholars and provide a window onto ancient Greek ideas of the mind for the general reader."--The Washington Times

The representations of mind in Greek tragedy are central to Western views of inwardness. Tragedy speaks of inwardness as woundable, dark, invaded by destructive passions. In this wide-ranging work Ruth Padel relates ancient tragedy to the biology and daemonology of the time, exploring Greek conceptions of the human interior and the ways in which Greek tragic literature shaped how we speak about our inner selves today. "In and Out of the Mind" reflects the cross-fertilization of the author's classical training with anthropology, history of religion and medicine, gender studies, and psychoanalysis. Arguing that Greek tragic language connects images of consciousness, even male consciousness, with the darkness attributed both to Hades and to women, Padel analyzes tragedy's biological and daemonological metaphors for what is within. Although these images are part of our inherited culture, their use in tragedy reveals attitudes toward feeling that are alien to modern readers.

The author provides important background to fascinating aspects of Greek life, such as entrail divination, impurity rituals, and belief in divinity inside and outside human selves, showing how these relate to the Greek understanding of mind. Central to her discussion is the question of how and why all human beings, female and male, suffer.

2. In and Out of the Mind Padel, Ruth

3. In and Out of the Mind Padel, Ruth