Items related to Napoleon on the Art of War

Napoleon I Napoleon on the Art of War

Napoleon on the Art of War 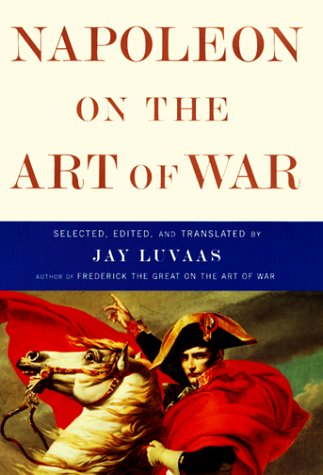 Unlike Sun-Tzu or Karl von Clausewitz, Napoleon never wrote a unified essay on his military philosophy. Yet as one of the world's greatest strategists and tacticians, his wisdom and genius can be found in his many and varied writings. Jay Luvaas has spent more than three decades pouring through the 32 volumes of Napoleon's correspondence, carefully translating and editing all of his writings on the art of war, and arranging them in seamless essays. The resulting book captures the brilliant commander's views on everything from the preparation of his forces to the organisation, planning and execution of his battles, all buttressing Napoleon's view that 'in war there is but one favourable moment; the great art is to seize it.' From the specifics of Napoleon's use of cavalry and unique reliance upon artillery to an all-encompassing vision of life from a man of supreme confidence and success, NAPOLEON ON THE ART OF WAR is the only straightforward explanation of Napoleon's campaigns and philosophy by the man himself.

Foreign Affairs A good sense of Napoleon's military genius emerges from this well-edited collection....the spirit of a great commander in a judicious selection of his own words.

Michael D. Hull ARMY Magazine This unprecedented volume is assured of study in every military school and by all serious readers of military history....Everyone with an interest in military history and the profession of arms will be indebted to Jay Luvaas for his superb work.

Provides Napoleon's views on everything, from the preparation of his forces to the organization, planning and execution of his battles. Luvaas has drawn upon 32 volumes of Napoleon's correspondence to produce essays on leadership, strategy and history that will be of interest to a broad audience

1. Napoleon on the Art of War

2. Napoleon on the Art of War

3. Napoleon on the Art of War

4. Napoleon on the Art of War

5. Napoleon On The Art of War

6. Napoleon On The Art of War

7. Napoleon on the Art of War

8. Napoleon on the Art of War

Book Description Free Press, 1999. Hardcover. Condition: New. Dust Jacket Condition: Fine. 1st Edition. Dust jacket as been slightly stained on the top corner of the binding, otherwise this book is new 208 p. Contains: Illustrations. From Booklist: Whatever his political failings, Napoleon's reputation as a military genius remains undiminished. His broad strategies and battlefield tactics are still studied at military colleges around the world. Given his ignominious end in exile, it is understandable that Napoleon never penned his "definitive" memoirs. However, his genius is revealed in the massive volume of his personal letters and military correspondence. Luvaas, a military historian, has arranged Napoleon's essays and correspondence into a coherent exposition of his attitudes and beliefs regarding warfare. Napoleon reveals his great psychological insight, his mastery of organization, and his unceasing faith in an aggressive style of warfare. Perhaps inadvertently, he also reveals his egotism and belief in his own destiny, which would lead to his downfall. While military buffs will find special delight here, there is much in this work that can appeal to the well-informed general reader. Jay Freeman Book Description Napoleon. The passage of time has not dimmed the power of his name. A century and a half after his death, Napoleon remains the greatest military genius of the modern world. Yet unlike Machiavelli, Clausewitz, or Sun Tzu, his name has not crowned any single literary work. The subject of thousands of biographies and treatises on warfare, he is the author of none. Until now. The great general and conqueror of Europe may not have written any books, but he was a prolific writer. Thousands of his missives to subordinates survive, and these documents reflect the broad range of a fearless and incisive mind. From them, military historian Jay Luvaas has wrought a seamless whole. Luvaas has spent decades culling, editing, and arranging Napoleon's thoughts into coherent essays and arguments. In the remarkable result. Napoleon speaks without interruption in a work that will forever change the way we view him. Luvaas covers every subject Napoleon wrote about, from the need for preparation--"Simply. Seller Inventory # 0001722

9. Napoleon on the Art of War Luvaas, Jay