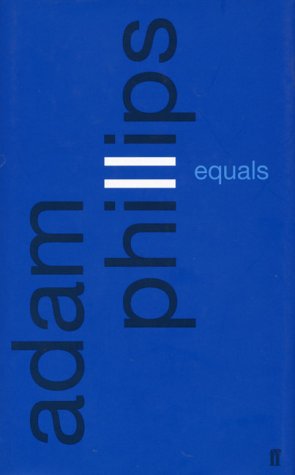 Adam Phillips's Equals attempts to relocate psychoanalysis as a natural part--and even a necessary part--of an engaged and unregimented life. Phillips is a politically aware writer. He is not a "party man" in any sense. But he has notions about democracy that inform, not just his view of psychoanalytic practice, but also his ideas about human freedom and happiness. Phillips reminds us that people suffer, not because they are in conflict with themselves, but because they have suppressed a conflict by imposing an unconscious authoritarian order over their thoughts and feelings.

The aim of psychoanalysis is to recreate emotional fluency. (One assumes the job of politics is to deal with the fallout.) Like democracy, psychoanalysis should recognise and legitimate conflict which an authoritarian (superegoistic) order would suppress. Drawing parallels between the idea of free association in democracy, and the practice of free association in psychoanalysis, Phillips writes: "hearing all those voices... may itself be a kind of happiness". Phillips's arguments are meticulous, and sometimes fussy. The general reader will find some passages obscure, but there is never the sense that Phillips is being deliberately obscurantist. His compassion--as a writer, as an analyst, and as a literary critic--is admirable. A child psychotherapist by training, his essay "Childhood Again" brings his strongest qualities together--ideological nous, close argument and compassion--in an entirely successful and memorable synthesis. --Simon Ings

"Brilliantly lucid; reading him on top form is like having bubbles of insight exploding inside one's head."