Items related to A Blackbird in Darkness

Warrington, Freda A Blackbird in Darkness

A Blackbird in Darkness 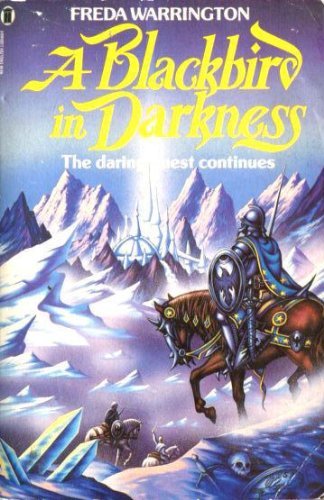 A Blackbird In Darkness

Don’t you love it? The brooding anti-hero, the gentle race forced to fight for survival, the woman of mystery. Warriors, sorcerers, demons, weird dimensions. Horses and swords! The perfect, ultimate, impossible Quest.

It’s hard to believe that it’s almost exactly thirty years since, as a schoolgirl, I sat down and wrote the first lines of A Blackbird in Silver. It wasn’t the first novel I’d started by any means, but it was the first one I actually managed to finish. That was because the image that first inspired me was the climax of the story. I kept going because I was always working towards that goal.

I loved Joy Chant, Michael Moorcock, Tanith Lee, and most of Tolkien – especially the portentous bits, the more high-flown and elvish the better! I was and still am severely allergic to dwarves, trolls, stable-boy kings and tweeness in general. I wanted to write something dark, something that really mattered – at least to me.

A Blackbird in Silver and A Blackbird in Darkness form a ‘duet’ that tells one story. The novel became a two-parter due to my publisher. They suggested making it a trilogy but I didn’t want to write a middle volume of ‘padding’ so it became a duo, and both books should be read as one. The idea sprang from asking myself, ‘What is the hardest thing you could possibly be required to do?’ Clue: it’s not killing the Serpent. (You’ll just have to read it!) And the Serpent M’gulfn? Growing up against the background of the Cold War, with the imminent threat of nuclear annihilation from bombs or unstable reactors, the image of lands laid waste and the soulessness of it and the impossibility of stopping it... all that fermenting in the murky depths of my young subconscious... that’s where my Serpent came from.

When I first began, my Blackbird world had a peculiar, intensely weird and brooding atmosphere that I still feel when I return to it. When I came to re-edit this Immanion press edition, I did so with a light touch. My style has changed so much that I could have ended up completely rewriting it and then it wouldn’t have been the same book. Little has been altered – except that Arlenmia’s poor put-upon maid now has a name! So, with some considered pruning, it keeps its original flavour and a certain naïve charm. Enjoy!

1. A BLACKBIRD IN DARKNESS

2. A BLACKBIRD IN DARKNESS