Items related to On the Brink: Inside the Race to Stop the Collapse...

Paulson, Henry M., Jr. On the Brink: Inside the Race to Stop the Collapse of the Global Financial System

On the Brink: Inside the Race to Stop the Collapse of the Global Financial System 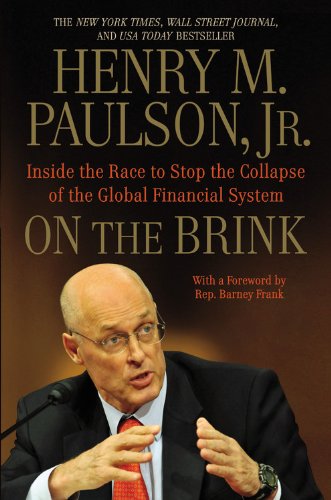 Paperback. Pub Date :2011-2-1 Pages: 478 Publisher: Hachette When Hank Paulson. the former CEO of Goldman Sachs. wasappointed in 2006 to become the nations next Secretary of theTreasury. he knew that his move from Wall Street to Washingtonwould be daunting and challenging. But Paulson had no idea that a year later. he would find himselfat the very epicenter of the worlds most cataclysmic financialcrisis since the Great Depression. Major institutions includingBear Stearns. Fannie Mae. Freddie Mac. Lehman Brothers. AIG. Merrill Lynch . and Citigroup. among others-all steeped in rich. longstanding tradition-literally teetered at the edge of collapse.Panic ensnared international markets. Worst of all. the creditcrisis spread to all parts of the US economy and grew moreominous with each passing day. destroying jobs across America andundermining the financial security millions of ...

From the Foreword, by Rep. Barney Frank, especially written for the trade paper edition:

"For many people, what will be most striking about this foreword is the fact that I wrote it. It's not every day a partisan, liberal Democrat gets a call from a conservative, high-ranking member of the George W. Bush administration asking for a favorable introduction to anything. But when former secretary of the Treasury Henry M. Paulson, Jr., called, I was quick to agree to express in print my enthusiasm for his excellent recounting of some of the most important and controversial events in our recent national history."
Book Description:

The definitive inside account of the global financial meltdown from the former US Treasury Secretary, Hank Paulson

1. On the Brink: Inside the Race to Stop the Collapse of the Global Financial System

2. On the Brink: Inside the Race to Stop the Collapse of the Global Financial System