Items related to The Nature of the Beast (New Windmills KS3)

Howker, Janni The Nature of the Beast (New Windmills KS3)

The Nature of the Beast (New Windmills KS3) 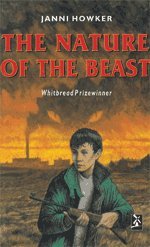 One of a series offering classic and contemporary fiction for schools to suit a range of ages and tastes. On the moors above Haverston, an unknown beast is attacking livestock, and Haverston itself is threatened by another beast - the threat of unemployment - as the local mill is about to close.

"* "One of the most exciting and talented writers we have." Philip Pullman * "Full of feeling, anger and explosiveness." Guardian * "An amazingly gifted writer." Times Educational Supplement * "One of the leading writers for teenagers of the decade." Observer"

A powerful novel about a community devastated by unemployment and shaken by the fear of a terrifying beast roaming the moors – which young Bill Coward is determined to track down at any cost.

1. The Nature of the Beast (Series: New Windmills)

Book Description Cambridge University Press/Heinemann, 1996. Hardcover. Condition: New. First edition. On the moors above Haverston, an unknown beast is at large. It is savage and destructive, attacking the livestock. Haverston itself is threatened by another beast â " the threat of unemployment â " as the local mill is about to close. Billy lives with his father and grandfather. He sees the beast as a symbol of the turmoil and uncertainty in his own life and decides to track it down and kill it. But it is a terrifying challenge, which he meets alone on the moors. Printed Pages: 144. Seller Inventory # 11463BV