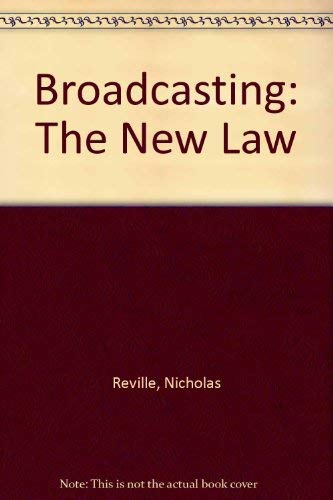 The Broadcasting Act 1990 contains probably the most important reforms of British broadcasting since commercial television was established in 1955. Its far-reaching provisions will need to be known by not only lawyers but also advertisers and those in the audio-visual media. "Broadcasting - The New Law" provides an essential guide to the new broadcasting framework, its implications, and the impact of European developments on the structure of the new legislation. It explains the effects of the provisions of the Act and considers whether they threaten the principles not only of public service broadcasting but also free and universal access. Also discussed is the ITC role in analyzing programme quality and the overseeing of programme standards by the separate Broadcasting Standards Council.

Book Description Butterworths, 1991. Condition: Fair. This is an ex-library book and may have the usual library/used-book markings inside.This book has soft covers. In fair condition, suitable as a study copy. Please note the Image in this listing is a stock photo and may not match the covers of the actual item,350grams, ISBN:9780406001375. Seller Inventory # 6463501

Book Description Butterworths Law, 1991. Paperback. Condition: Good. Ex-library. WE ARE PROCESSING ORDERS AS NORMAL DURING THIS VIRUS EPIDEMIC, ALL ITEMS ARE SENT BY ROYAL MAIL. DISPATCHED FROM THE UK WITHIN 24 HOURS ( BOOKS ORDERED OVER THE WEEKEND DISPATCHED ON MONDAY) BY ROYAL MAIL. ALL OVERSEAS ORDERS SENT BY AIR MAIL. WE ALSO ACCEPT PAYMENT IN US DOLLARS OR EURO BY BANK TRANSFER. Seller Inventory # mon0000563052

Book Description Butterworth-Heinemann, London, 1991. Paperback. Condition: Very Good. 214 pp. Some wear to the cover, and ex - lib stamp on the ffep and inside cover. Seller Inventory # 037185