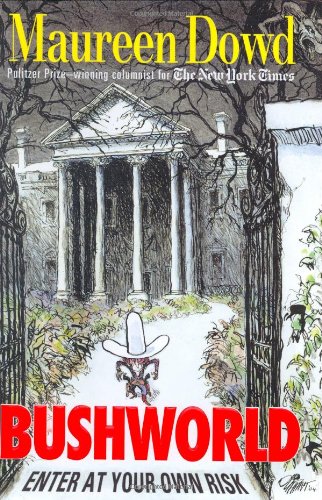 The columnist discusses the Bush dynasty and the people surrounding the administration, including Cheney, Ashcroft, Rumsfeld, Rice, Rove, Wolfowitz, and Perle.

If metaphors were cigarettes, New York Times columnist Maureen Dowd would be a chain smoker. Through many years and countless columns spent chronicling the fall of George H.W. Bush and the ascension of George W. Bush, Dowd has employed analogies to feudalism, The Godfather, Mini-Me, traditional "mommy" and "daddy" roles, and scores more. In this, her first book, Dowd compiles well over a hundred columns and summarizes the Bush dynasty under a single comprehensive analogy: an alternate universe called Bushworld ("It's their reality. We just live and die in it.") Dowd, who as a reporter was assigned to cover the elder Bush, seems to have a soft spot for the guy even as she describes a president with no plans to do anything but remain president. But she is alarmed by the younger Bush whom she sees surrounding himself with dangerous ideologues and starting a poorly thought-out war with disastrous consequences. Each column is relatively short, and Dowd never shares much new information, but instead offers the kind of informed skeptical perspective that's essential when interpreting the public statements of policymakers. Dowd's cleverness sometimes gets in the way of clarity, and one occasionally wishes she'd quit kidding around and say something substantive, especially since the reader of Bushworld will likely be several years removed from the news that inspired a particular column. Cleverness can be a virtue for a writer as well, getting a laugh while perfectly illustrating a point, such as when she says of the notoriously cloistered Dubya. "All presidents are in a bubble, but the boy king was so insulated he was in a thermos." Or when she says of the Iraq War's aftermath "for the first time in history, Americans are searching for the reasons we went to war after the war is over." --John Moe, Amazon.com

'...Dowd is mordantly witty and sharply incisive.' -- The Sunday Telegraph

'...the canniest political columnist at work in America today.' -- The Irish Times

Book Description Putnam Adult, 2004. Hardcover. Condition: New. Excellent condition. Interior is tight, bright and clean; no underlining, notes or highlighting. Hard covers are tight and stiff. Complete with original and sticker free paper dust cover. Minor scuffing, a 1/4 inch tear (repaired) and/or wrinkles on the paper dust cover. 100% Satisfaction Guaranteed. All items are carefully enclosed with bubble wrap. We ship promptly and worldwide via US Post and will email you a tracking number. Seller Inventory # SKU0050500

9. Bushworld: Enter at Your Own Risk