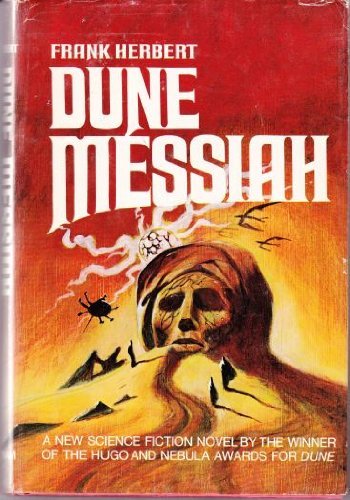 Paul Atreides, ruler of a thousand planets, great victor of a holy war, prince turned revolutionary leader, messiah of a fanatical religious sisterhood, is to be brought low by the very forces that created him. Yet foreseeing the plans of his enemies, he determines to drive on towards his own, shockingly different, vision of the future.

Unique among SF novels . . . I know nothing comparable to it except The Lord of the Rings. (Arthur C. Clarke on DUNE)

One of the landmarks of modern science fiction . . . an amazing feat of creation. (Analog on DUNE)

Book Description Hard Cover. Condition: Very Good. Dust Jacket Condition: Very Good. Book Club (BCE/BOMC). Book club edition, with gutter code M15. Top edge lightly foxed. 1969 Hard Cover. We have more books available by this author! 221 pp. "A holy war fought in the spaceways and on a thousand planets had made Paul Atreides the religious and political leader of the Galaxy. The product of generations of controlled breeding, trained in arcane disciplines by the Bene Gesserit sisterhood, he had more than human powers, including the ability to sense the shape of the future. Then the Bene Gesserit, unable to dominate the man they had made a god, set out to overthrow him -- a plot that involved such diverse characters as the Reverend Mother Gaius Helen Mohiam, the Tleilaxu face dancer Scytale, a ghola re-creation of a dead hero, and Paul's consort, the Princess Irulan. But Paul Atreides could foresee their plans and shape them to an unexpected and shocking goal. Dune Messiah, an epic of imperial intrigue that spans the universe -- rich and strange in its evocation of the history, institutions, and people of a far future age -- carries on the monumental story begun in Dune, which won the Nebula and Hugo awards from the two leading science-fiction organizations. Complex, brilliant, dramatic, Frank Herbert's new book is one of the most remarkable novels, in or out of science fiction, to be published this year. Frank Herbert, a West Coast newspaperman, has been writing science fiction for more than twenty years; his first novel, Dragon in the Sea, is still in print here and abroad. His work has drawn on his studies of Oriental religion and undersea geology; he has also been a professional photographer, TV cameraman, radio news commentator, lay analyst, and oyster diver. Mr. Herbert is married and lives in San Francisco. Seller Inventory # 2311679