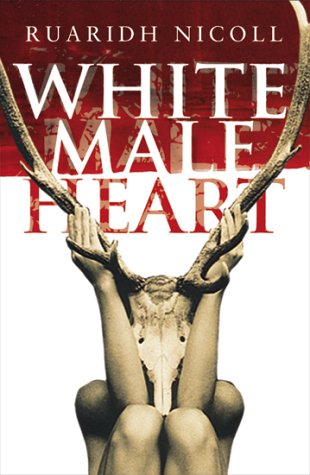 Deep in the wilderness of Scotland, Aaron and Hugh have been friends for as long as they can remember. When a woman moves into the area, she drives an emotional wedge between the two. They turn against their world and vent their frustration, anger and despair in the only way they know how.

Ruaridh Nicoll’s raw and lyrical first novel White Male Heart is about masculine angst and romantic treachery and has all the saturnine beauty of the Scottish Highlands, which provide the narrative’s backdrop.

The plot is simple enough. Two old friends, Aaron and Hugh, have grown up together amid the ruggedly lovely world of fishfarms and gillies, whippets and shepherds. But this rural idyll, if such it is, doesn’t last long. When Rebecca, a sculptress from the big city, arrives her urbanity and sophistication seem to underscore the limitations of Hugh and Aaron’s world. And her capricious beauty is even more destructive as it turns the two Highland boys into bitter love-rivals. The struggles between the pair provide the motive force for the book’s melancholy and brutal denouement.

White Male Heart is not flawless: the carefully crafted prose sometimes seems a little self-conscious and the dialogue, particularly between the sexes, occasionally comes across as stilted. But long after any such weaknesses are forgotten, the dark beauty of the book’s remarkably realised Scottish scenery still lingers. This is a seriously impressive debut.--Sean Thomas

"Brutal and beautiful--the quality of observation is breathtaking."--Val McDermid "This is a novel of startling originality, an absorbing psychological thriller as well as a deft portrayal of friendship and betrayal."