Washington, Harriet A. Medical Apartheid: The Dark History of Medical Experimentation on Black Americans from Colonial Times to the Present

Medical Apartheid: The Dark History of Medical Experimentation on Black Americans from Colonial Times to the Present 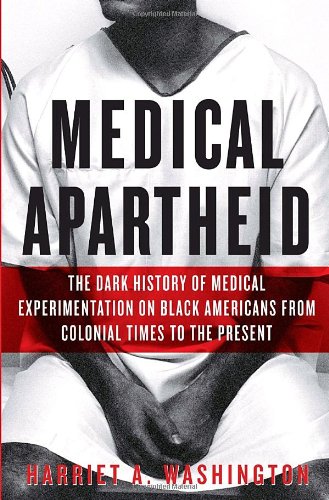 From the era of slavery to the present day, the first full history of black America’s shocking mistreatment as unwilling and unwitting experimental subjects at the hands of the medical establishment.

Medical Apartheid is the first and only comprehensive history of medical experimentation on African Americans. Starting with the earliest encounters between black Americans and Western medical researchers and the racist pseudoscience that resulted, it details the ways both slaves and freedmen were used in hospitals for experiments conducted without their knowledge—a tradition that continues today within some black populations. It reveals how blacks have historically been prey to grave-robbing as well as unauthorized autopsies and dissections. Moving into the twentieth century, it shows how the pseudoscience of eugenics and social Darwinism was used to justify experimental exploitation and shoddy medical treatment of blacks, and the view that they were biologically inferior, oversexed, and unfit for adult responsibilities. Shocking new details about the government’s notorious Tuskegee experiment are revealed, as are similar, less-well-known medical atrocities conducted by the government, the armed forces, prisons, and private institutions.

The product of years of prodigious research into medical journals and experimental reports long undisturbed, Medical Apartheid reveals the hidden underbelly of scientific research and makes possible, for the first time, an understanding of the roots of the African American health deficit. At last, it provides the fullest possible context for comprehending the behavioral fallout that has caused black Americans to view researchers—and indeed the whole medical establishment—with such deep distrust. No one concerned with issues of public health and racial justice can afford not to read Medical Apartheid, a masterful book that will stir up both controversy and long-needed debate.

"This groundbreaking study documents that the infamous Tuskegee experiment, in which black syphilitic men were studied but not treated, was simply the most publicized in a long, and continuing, history of the American medical establishment using African Americans as unwitting or unwilling human guinea pigs . . . Washington is a great storyteller, and in addition to giving us an abundance of information on 'scientific racism, ' the book, even at its most disturbing, is compulsively readable. It covers a wide range of topics--the history of hospitals not charging black patients so that, after death, their bodies could be used for anatomy classes; the exhaustive research done on black prisoners throughout the 20th century--and paints a powerful and disturbing portrait of medicine, race, sex, and the abuse of power."
--Publishers Weekly (starred review)

"Medical ethicist and journalist Washington details the abusive medical practices to which African Americans have been subjected.
"She begins her shocking history in the colonial period, when owners would hire out or sell slaves to physicians for use as guinea pigs in medical experiments. Into the 19th century, black cadavers were routinely exploited for profit by whites who shipped them to medical schools for dissection and to museums and traveling shows for casual public display. The most notorious case here may be the Tuskegee Syphilis Study, in which about 600 syphilitic men were left untreated by the U.S. Public Health Service so it could study the progression of the disease, but Washington asserts that it was the forerunner to a host of similar medical abuses . . . African American skepticism about the medical establishment and reluctance to participate in medical research is an unfortunate result. One of her goals in writing this book, aside from documenting a shameful past, is to convince them that they must participate actively in therapeutic medical research, especially in areas that most affect their community's health, while remaining ever alert to possible abuses.
"Sweeping and powerful."
--Kirkus Reviews (starred review) About the Author:

HARRIET A. WASHINGTON has been a fellow in ethics at the Harvard Medical School, a fellow at the Harvard School of Public Health, and a senior research scholar at the National Center for Bioethics at Tuskegee University. As a journalist and editor, she has worked for USA Today and several other publications, been a Knight Fellow at Stanford University and has written for such academic forums as the Harvard Public Health Review and The New England Journal of Medicine. She is the recipient of several prestigious awards for her work. Washington lives in New York City.

1. Medical Apartheid: The Dark History of Medical Experimentation on Black Americans from Colonial Times to the Present