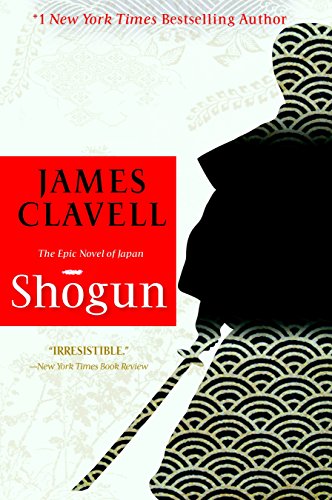 A bold English adventurer. An invincible Japanese warlord. A beautiful woman torn between two ways of life, two ways of love. All brought together in an extraordinary saga of a time and a place aflame with conflict, passion, ambition, lust, and the struggle for power.

Here is the world-famous novel of Japan that is the earliest book in James Clavell's masterly Asian saga. Set in the year 1600, it tells the story of a bold English pilot whose ship was blown ashore in Japan, where he encountered two people who were to change his life: a warlord with his own quest for power, and a beautiful interpreter torn between two ways of life and two ways of love. The principal figures are John Blackthorne, whose dream it is to be the first Englishman to circumnavigate the globe, to wrest control of the trade between Japan and China from Portuguese, and to return home a man of wealth and position; Toranaga, the most powerful feudal lord in Japan, who strives and schemes to seize ultimate power by becoming Shogun--the Supreme Military Dictator--and to unite the warring samurai fiefdoms under his own masterly and farsighted leadership; and the Lady Mariko, a Catholic convert whose conflicting loyalties to the Church and her country are compounded when she falls in love with Blackthorne, the barbarian intruder. In dramatizing how a Westerner, the representative man of his time, comes to be altered by his exposure to an alien culture, Mr. Clavell provides a spellbinding depiction of a nation seething with violence and intrigue as it moves from the medieval world to the modern. Praise for Shogun "I can't remember when a novel has seized my mind like this one. . . . It's not only something you read--you live it."--New York Times Book Review "Adventure and action, the suspense of danger, shocking touching human relationships . . . a climactic human story."--Los Angeles Times "A tale surging with action, intrigue and love . . . a huge cast . . . vast and dramatic . . . stunning . . . savage . . . beautiful . . . an extraordinary performance."--Publishers Weekly "Exciting, totally absorbing...be prepared for late nights, meals unlasting, buisness unattended."--Philadelphia Inquirer