Items related to Return to Elysium 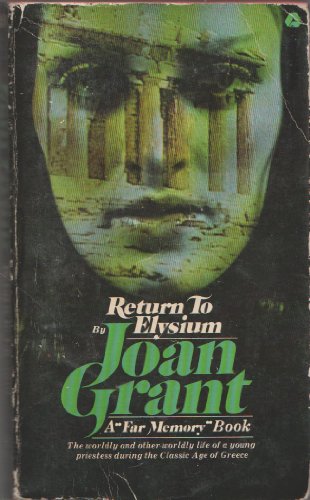 The sixth of Joan Grant's "Far Memory" novels, Return to Elysium is set in the second century BC among the islands of Ancient Greece as well as in Rome before its rise to imperial power. Lucina of Greece was orphaned at a young age and brought up by foster parents. The story begins when she is 13 and is sent to a place called Elysium for study under the tutelage of her philosopher guardian. She is the only woman in Elysium and thought to be very unusual because of her superior intellect. Her life is a battle between cool reason and logic and her own intense psychic abilities. There is pain because her great strength has little outlet in a female life. She flees Elysium with two companions to the young city of Rome, considered by Greeks to be an inferior society. Some years are spent as priestess and oracle-giver in a temple until she escapes with a lover and retreats into marriage. But eventually Lucina returns to Elysium for a breath-taking ending. As a child growing up in Edwardian England, Joan Grant became aware of an astonishing ability to remember previous lifetimes, and as an author professed her seven novels to be based on her personal recollections of other incarnations, male and female, in ancient civilisations. "No novelist writing today possesses more completely what Henry James called 'the sense of the past'." Daily Telegraph