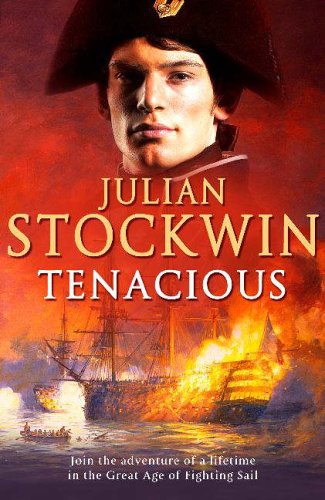 Thomas Paine Kydd is in Halifax enjoying the recognition and favour of his fellow officers when Tenacious is summoned to join Horatio Nelson's taskforce on an urgent reconnaissance mission. Intelligence suggests the French Revolution is about to set the Mediterranean ablaze, but Bonaparte's fleet is nowhere to be found. Nelson and his 'Band of Brothers' begin a desperate search for him.

Kydd's newfound ambition fuels his desire to be at the forefront of the hunt. But with power comes responsibility; with responsibility, accountability. Kydd will face his greatest challenge ever amidst bloodstained seas. And defeat will mean humiliation - or death.

Packed full of seafaring detail and historical fact, Stockwin's world of storms, danger and rip-roaring adventure on the high seas is so real it is hard to believe the book is fiction and it is harder still to put it down.

Stockwin paints a vivid picture of life aboard the mighty ship-of-the-line... the harsh naval discipline, the rancid food, and the skill of the common sailor are all skilfully evoked. (Daily Express on KYDD)

'In the exciting sixth naval adventure set during the Napoleonic Wars, this time Captain Kydd is summoned to join Admiral Nelson's task force to undertake a perilous mission to halt dire French plans in the Mediterranean. The chase for the French fleet is on and each day the sea becomes more bloodstained.' (Weekend Gold Coast Bulletin, Australia)

'A choice book for the 200th anniversary of Nelson's greatest victory, and death . . . In a word: readable' (The Herald Sun, Australia)

I was soon turning over the pages almost indecently fast . . . Roll on, the promised adventures of Kydd and Renzi. (Independent)

The vantage point of the common sailor gives the nautical novel a fresh twist. In Stockwin's hands the sea story will continue to entrance readers across the world. ( Guardian)

The more I researched for this book, the more I came to believe that it was not Trafalgar that was Nelson’s finest hour – to my mind that came seven years earlier, in the shallow, sandy waters of Aboukir Bay, off the coast of Alexandria – at the Battle of the Nile – and an engagement which is central to this book. Tom Kydd actually meets his great hero Lord Nelson and is eye witness to his tumultuous welcome at Naples after the great victory. It is always a challenge for a writer to deal with real characters from history but no historical fiction writer dealing with the great age of sail can ignore Nelson. It was with some humility that I wrote my brief pen portrait, and I trust it gives some small insights into both the seamanship and the humanity of the man.

Book Description Hodder & Stoughton Canada, 2005. Hardcover. Condition: Good. Connecting readers with great books since 1972. Used books may not include companion materials, some shelf wear, may contain highlighting/notes, may not include cdrom or access codes. Customer service is our top priority!. Seller Inventory # S_292144847

Book Description Hodder & Stoughton, 2005. Condition: Good. Former Library book. Shows some signs of wear, and may have some markings on the inside. Seller Inventory # 4006560-6

Book Description Hodder & Stoughton, 2005. Condition: Good. Ships from the UK. Former Library book. Shows some signs of wear, and may have some markings on the inside. Seller Inventory # 4006560-6

Book Description Hodder & Stoughton Canada, 2005. Hardback. Condition: Very Good. The book has been read, but is in excellent condition. Pages are intact and not marred by notes or highlighting. The spine remains undamaged. Seller Inventory # GOR001283421

Book Description Hodder & Stoughton, 2005. Hardcover. Condition: Good. Ex library copy with usual stamps/stickers Good condition is defined as: a copy that has been read but remains in clean condition. All of the pages are intact and the cover is intact and the spine may show signs of wear. The book may have minor markings which are not specifically mentioned. Most items will be dispatched the same or the next working day. Seller Inventory # wbb0016945251

Book Description Hodder and Stoughton, 2005. Hardcover. Condition: Used; Good. Ex Library Copy **SHIPPED FROM UK** We believe you will be completely satisfied with our quick and reliable service. All orders are dispatched as swiftly as possible! Buy with confidence!. Seller Inventory # 4007911