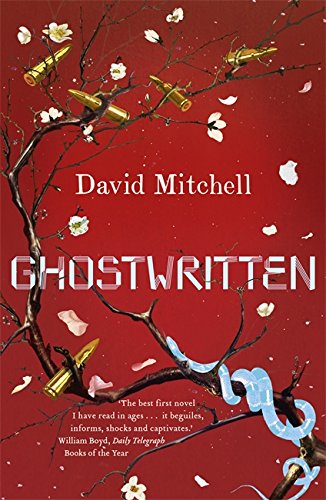 Winner of the Mail on Sunday/John Llewellyn Rhys Prize.

A magnificent achievement and an engrossing experience, David Mitchell's first novel announced the arrival of one of the most exciting writers of the twenty-first century.

An apocalyptic cult member carries out a gas attack on a rush-hour metro, but what links him to a jazz buff in downtown Tokyo? Or to a Mongolian gangster, a woman on a holy mountain who talks to a tree, and a late night New York DJ?

Set at the fugitive edges of Asia and Europe, Ghostwritten weaves together a host of characters, their interconnected destinies determined by the inescapable forces of cause and effect.

"What is real and what is not?": David Mitchell's first novel, Ghostwritten: A Novel in Nine Parts, plays with this question throughout its "parts". (That there are 10 sections is just part of the mystery of this book's schema.) Told through a range of voices, scattered across the globe--Tokyo, Hong Kong, Mongolia, Petersburg, London--Ghostwritten has been described as a "firework display, shooting off in a dozen different narrative directions" (Adam Lively).

Certainly, Mitchell offers his readers a vertiginous, sometimes seductive, display of persona and place. "Twenty million people live and work in Tokyo," he writes in "Okinawa", the first section in the novel. "It's so big that nobody really knows where it stops." That sense of the global extension of the (post)modern city, the networks-- cultural, technological, phantasmagoric--to which it gives rise, is one key to this story of a Japanese death cult devoted to purging the "unclean" (gas attacks on the metro). "No, in Tokyo you have to make your place inside your head": that's how this immense world gets smaller, more subjective, more mad, as the narrator, Mr Kobayashi, sheds his "old family of the skin" to join a new "family of the spirit". It's a common theme. "I'm this person, I'm this person, I'm that person, I'm that person too," chants the voice of "Hong Kong", in the second section of the book. "No wonder it's all such a fucking mess." Neal's talking about his world, his life as a Hong Kong trader--"he's a man of departments, compartments, apartments"--but he might also be describing the experience of reading Ghostwritten. At once loquacious and knowing, leisurely and frantic, Mitchell offers his readers a huge, but fragmentary, portmanteau which builds in the links between its parts--aching bodies, reality police, the "ghost" writer in the machine of contemporary life, its mad, comic, and cosmic voices--without quite convincing you that they really do come together. -- Vicky Lebeau

One of the best first novels I've read in a long time . . . I couldn't put it down. (AS Byatt Mail on Sunday)

A remarkable novel by a young writer of remarkable talent. (Observer)

The best first novel I have read in ages . . . it beguiles, informs, shocks and captivates. (William Boyd Daily Telegraph)

If you want to know what the distinctive literature of the 21st century will look like, begin here. (Boyd Tonkin Independent)

Book Description PAPERBACK. Condition: New. Book Cover and ISBN may be different from US edition but contents as same US Edition. Excellent Quality,Quick delivery by USPS/UPS/FEDEX/DHL/ARAMEX, We may ship the books from Asian regions for inventory purpose. Our courier service is not available at PO BOX. Seller Inventory # aabe_9780340739754