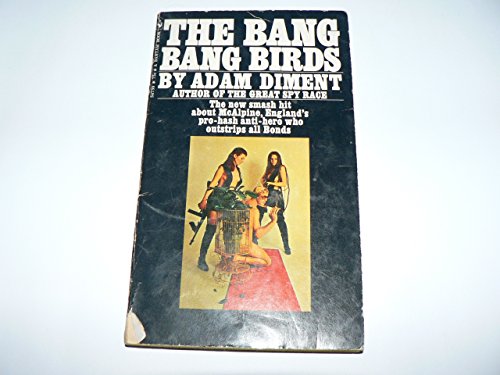 Book Description Paperback. Condition: Fair. A readable copy of the book which may include some defects such as highlighting and notes. Cover and pages may be creased and show discolouration. Seller Inventory # GOR002194627

Book Description Pan Books, 1969. Paperback. Condition: Good. All orders are dispatched the following working day from our UK warehouse. Established in 2004, we have over 500,000 books in stock. No quibble refund if not completely satisfied. Seller Inventory # mon0001866338

Book Description Pan Books, London, 1969. Original Wraps. Condition: Very Good. Dust Jacket Condition: No Jacket, as Issued. First Paperback Edition. Unabridged - first impression of the first paperback edition. Originally published in hardback in 1968 by Michael Joseph. Psychedelic style cover illustration. ***Very good in colour printed card wrappers. Covers nice and clean, with just some light marks and creasing commensurate with age and handling. Rear cover has a light crease to the bottom corner. Light reading creases to the spine. Wrappers slightly browned but still bright. Spine tight. No tears. Paper stock slightly tanned. No inscriptions. ***191 pages plus one page of publisher's adverts to the rear. 178 mm x110 mm. ***Frederick Adam Diment (born 1943) is a spy novelist who published four novels between 1967 and 1971. All four are about the adventures of Philip McAlpine whom critic Anthony Boucher described as an agent who smokes hashish, leads a highly active sex life, kills vividly, uses (or even coins) the latest London slang and still seems a perfectly real (and even oddly likeable) young man rather than a reflected Bond image. A film version of The Dolly Dolly Spy with David Hemmings playing McAlpine was scheduled to go into production but was never made. Diment disappeared from public view after his last novel, adding to his cult figure status among fans of 1960s spy novels. According to The Observer, by 1975 Diment was living in Zurich, shunning publicity, and had no plans to write further novels.' [Wiki] ***'The sex is highly charged. The birds are beautiful and highly lethal (but naturally). And McAlpine is on peak form.' [Sunday Mirror] Review quote from back wrapper. ***First impression of the first paperback edition of this 1960s spy novel, with classic 60s cover art. ***For all our books, postage is charged at cost, allowing for packaging: any shipping rates indicated on ABE are an average only: we will reduce the P & P charge where appropriate - please contact us for postal rates for heavier books and sets etc. Seller Inventory # PB103

Book Description Pan Books, 1969. Paperback. Condition: Very Good. Different cover than shown by Amazon but isbn is correct. Has psychediliv explosion and cartoon naked girls with guns. Covers and spine are uncreased. Probably unread, though it does have slight foxing to page closed edges . HInt of tanning to margis slight ageing to the white of covers. Clean and tight. ; 6.93 X 4.02 X 0.55 inches. Seller Inventory # 28388