Items related to Discovering How to Pray

MacDonald, Hope Discovering How to Pray

Discovering How to Pray 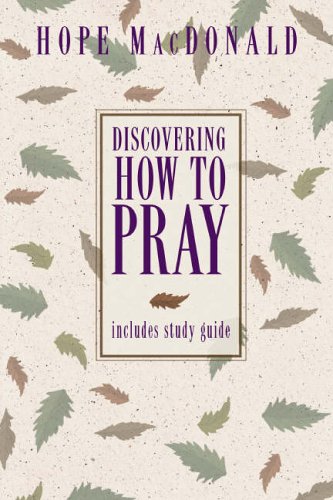 If you think there’s nothing new that can be written on prayer -- think again! In this practical and inspiring book, Discovering How to Pray, Hope MacDonald gives refreshing new insights into a perennial problem of Christians -- how, when, where, and why we should pray. The author distinguishes two kinds of prayer--'arrow' prayer (the kind we shoot up to God all day long) and the prayer of worship and intercession. Although arrow prayers are an important part of Christian life, says MacDonald, we cannot live on them unless they are 'grounded upon the foundation of our prayers of worship and intercession.' MacDonald outlines nine steps that can lead you to a meaningful life of prayer and worship: ·Making time to pray ·Finding a quiet place ·Worshiping and meditating ·Confession ·Time of thanksgiving ·Saying a prayer of protection ·Inner listening ·The prayer of faith ·Picturing the prayer as answered

Hope MacDonald is a well know speaker and author whose books have sold over 500,000 copies and are printed in nine languages. She and her husband ministered for 31 years with the mission of Young Life, studied for 6 months with Francis Schaeffer and served as missionaries in Brazil. For the past 16 years her husband has been senior pastor in Seattle, Washington, where they make their home.

ONE
LEARNING TO PRAY
I remember the first time I asked God to teach me to pray. We had just arrived in Brazil as missionaries. My daughter, Debbie, and I were having our first experience shopping at the feira, the open-air market. The streets were hot and dusty and filled with hundreds of busy shoppers, all chattering in their own language. The small, covered stands were filled with strange-looking fruits and vegetables. My first purchase was a piece of fruit called mamao. As I held out my faded, wrinkled money to the vendor (hoping he would be honest enough to take just the price of the fruit), I suddenly felt reduced to the state of a two-year-old. Here I was, a fairly intelligent mother of three children, and I couldn't even give the man the right amount of money! My vocabulary consisted of three phrases: good morning, good evening, and thank you. The people were pushing and shoving around us, trying to get a good look at the "foreigners." I felt so helpless.
My eyes filled with tears of frustration as I took Debbie's hand and walked to the next little stand. I wondered what we were doing there. How could we ever learn the language well enough to communicate God's great love to the students? And it was there, as I stood in front of the comforting, familiar green-bean stand, that I cried out, "O, Lord, teach me to pray!" I knew then anything we would accomplish in the land of Brazil would only be done through the power of prayer, and I didn't know much about it.
God heard the prayer I whispered to Him in the crowded Brazilian marketplace, and He began to teach me how to pray. That was eleven years ago, and today I find myself sharing with you the nine steps that have changed my prayer life.
I have since found that I was not alone in my quest. In talking to Christians around the world, I have discovered that their greatest desire is to know how to pray. When a survey was conducted on "Sermons Americans want to hear," it was discovered that the people's first choice was "How can I make prayer more effective?" Recently, our pastor announced he would be speaking on prayer the following Sunday. The next week the church was packed. They had to bring in extra chairs. When he stood up to speak, there was a hushed atmosphere of expectancy. I noticed people all around me reaching for paper and pencil so they could write down ideas that would help them become praying Christians. Christians want to pray, but they don't seem to know how. Our spiritual lives are at a low ebb.
A few weeks ago a troubled teenage boy was talking to my son Dan about this same thing. He said, "I know I should spend time with God each day, and I really do want to. I read my Bible for twenty minutes, and then when I pray I say everything I can think of in two minutes. Can you help me?"
His plea reminded me so much of what the disciples asked Jesus when they came to Him one afternoon and said, "Master, teach us to pray." As you read through the Gospels, you will find that this is the only thing they ever asked Jesus to teach them. They had watched His life and knew prayer was an important part of every great and significant moment. They knew Jesus didn't pray just to set a good example for them, but because it made a difference in His life. They saw that He expected it to make a difference. And because they saw Him pray so often, they asked Him to teach them to pray. If you feel the way I often do, as though you do not know how to pray the way you would like to, don't be discouraged. You're in good company. Even the disciples had to ask Jesus to teach them to pray!
A few months ago when my husband and I were in Korea, he was talking about prayer with the pastor of one of the largest churches in the city of Seoul. At the end of their conversation, the pastor shook his head sadly and said, "The greatest need of my people is to know how to pray." That same evening we went to a coffeehouse where we talked to some students about prayer. One of the girls remarked, "I have been a Christian for eleven years, but I do not know how to pray. I wish I did." A few weeks later, I was speaking to a group of women in the Philippines. When I finished, they crowded around me saying how often they longed for a meaningful prayer life, but they just didn't know how to go about it. This same thought has been expressed to my husband and myself over and over again as we have talked to Christians in Australia, India, and other parts of the world.
The question then arises, What exactly is prayer? Is it really so complicated that Christians must spend a lifetime searching for it? Or have we made something confusing out of what God intended to be beautiful in its simplicity?
I like to think of prayer as a conversation between two friends who love and understand each other. It is through prayer that we see God's love and power at work in our lives and in the lives of the people for whom we are praying. As a result, prayer makes us come alive spiritually. We find a new hunger and thirst to spend time with Him and to stay close to Him. Prayer is the key that opens the door to a whole new world—a world lived in the active, conscious presence of the living God. It becomes the foundation of everything we do. Jesus Christ died on the cross to make this communication possible!

1. Discovering How to Pray

2. Discovering How to Pray

3. Discovering How to Pray

4. Discovering How to Pray MacDonald, Hope