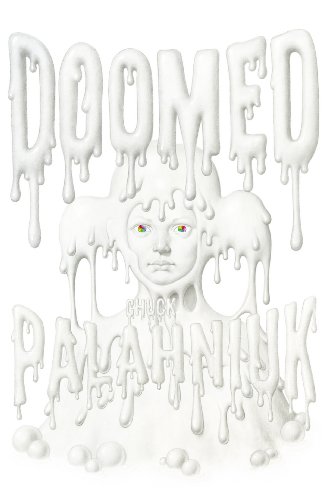 The bestselling Damned chronicled Madison’s journey across the unspeakable (and really gross) landscape of the afterlife to confront the Devil himself. But her story isn’t over yet. In a series of electronic dispatches from the Great Beyond, Doomed describes the ultimate showdown between Good and Evil.

After a Halloween ritual gone awry, Madison finds herself trapped in Purgatory – or, as mortals like you and I know it, Earth. She can see and hear every detail of the world she left behind, yet she’s invisible to everyone who’s still alive. Not only do people look right through her, they walk right through her as well. The upside is that, no longer subject to physical limitations, she can pass through doors and walls. Her first stop is her parents’ luxurious apartment, where she encounters the ghost of her long-deceased grandmother. For Madison, the encounter triggers memories of the awful summer she spent upstate with Nana Minnie and her grandfather, Papadaddy. As she revisits the painful truth of what transpired over those months, her saga of eternal damnation takes on a new and sinister meaning. Madison has been in Satan’s sights from the very beginning, as through her and her narcissistic celebrity parents he plans to engineer an era of eternal damnation. For everyone.

Once again, our unconventional but plucky heroine must face her fears and gather her wits for the battle of a lifetime. Dante Alighieri, watch your back; Chuck Palahniuk is gaining on you.

"It's not for the faint-stomached. It's also rather brilliant... A grand, funny, troubling and rewarding read... Maddie is my new post-alive heroine." (Euan Ferguson Observer)

"Funny, bloody and always original. But then we should expect nothing less from the creator of Fight Club." (The Sun)

"A fantastic exploration of modern fame, unfolding in typically opaque sci-fi style as we follow child-of-the-stars Madison after she overdoses on Oscar night and is driven to hell in a limo." (Grazia)

Madison Spencer, the liveliest and snarkiest dead girl in the universe, continues the afterlife adventure begun in Chuck Palahniuk’s bestseller Damned. Just as that novel brought us a brilliant Hell that only Palahniuk could imagine, Doomed is a dark and twisted apocalyptic vision from this provocative storyteller.

Book Description JONATHAN CAPE (RANDOM), 2013. Paperback. Condition: Good. Connecting readers with great books since 1972. Used books may not include companion materials, some shelf wear, may contain highlighting/notes, may not include cdrom or access codes. Customer service is our top priority!. Seller Inventory # S_266387910

Book Description Paperback. Condition: Very Good. The book has been read, but is in excellent condition. Pages are intact and not marred by notes or highlighting. The spine remains undamaged. Seller Inventory # GOR005452142