Items related to Intercessory Prayer and the Monastic Ideal in the Time...

Choy, Renie S. Intercessory Prayer and the Monastic Ideal in the Time of the Carolingian Reforms (Oxford Theology and Religion Monographs) 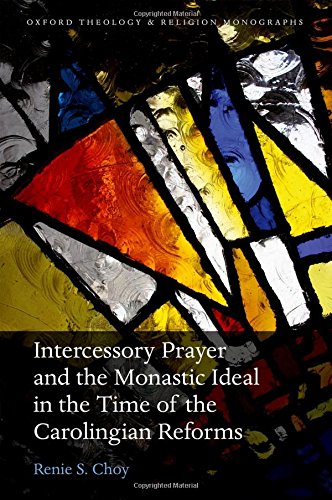 In early medieval Europe, monasticism constituted a significant force in society because the prayers of the religious on behalf of others featured as powerful currency. The study of this phenomenon is at once full of potential and peril, rightly drawing attention to the wider social involvement of an otherwise exclusive group, but also describing a religious community in terms of its service provision. Previous scholarship has focused on the supply and demand of prayer within the medieval economy of power, patronage, and gift exchange. Intercessory Prayer and the Monastic Ideal in the Time of the Carolingian Reforms is the first volume to explain how this transactional dimension of prayer factored into monastic spirituality. Renie S. Choy uncovers the relationship between the intercessory function of monasteries and the ascetic concern for moral conversion in the minds of prominent religious leaders active between c. 750-820. Through sustained analysis of the devotional thought of Benedict of Aniane and contemporaneous religious reformers during the reigns of Charlemagne and Louis the Pious, Choy examines key topics in the study of Carolingian monasticism: liturgical organization and the intercessory performances of the Mass and the Divine Office, monastic theology, and relationships of prayer within monastic communities and with the world outside. Arguing that monastic leaders showed new interest on the intersection between the interiority of prayer and the functional world of social relationships, this study reveals the ascetic ideal undergirding the provision of intercessory prayer by monasteries.

Notwithstanding, Renie Choy has produced an exemplary study, engaging and well-researched, that should be indispensable to the student of early medieval monasticism (Todd Matthew Mattingly, University of Toronto, The Journal of Medieval Monastic Studies)

[T]his is a carefully done book, with thoughtful comments on how some ninth-century monastic authors perceived the nature and value of prayer. (Constance B. Bouchard, Church History and Religious Culture)

Choy's is a book that would benefit any historian of the early middle ages, of monasticism, of church history, or of liturgy. Like the prayers of the nuns and monks which the book so perceptively examines, Intercessory Prayer and the Monastic Ideal in the Time of the Carolingian Reforms is a generous gift to our community. (M.A. Claussen, The Medieval Review)

1. Intercessory Prayer and the Monastic Ideal in the Time of the Carolingian Reforms (Hardback)

Book Description Oxford University Press, 2021. Condition: NEW. 9780198790518 This listing is a new book, a title currently in-print which we order directly and immediately from the publisher. Print on Demand title, produced to the highest standard, and there would be a delay in dispatch of around 10 working days. For all enquiries, please contact Herb Tandree Philosophy Books directly - customer service is our primary goal. Seller Inventory # HTANDREE01597713

2. Intercessory Prayer and the Monastic Ideal in the Time of the Carolingian Reforms