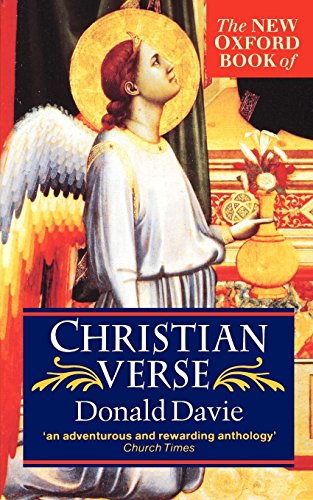 Offering both familiar poems and some fascinating unfamiliar ones, this anthology contains over 250 poems that deal with Christianity. Ranging from the Anglo-Saxon masterpiece "The Dream of the Rood" to the works of modern poets such as T.S. Eliot, W.H. Auden, Sir John Betjeman, and John Berryman, Davie has chosen works from around the world, including several women poets-such as Elizabethan Countess of Pembroke and Emily Dickinson-as well as the four men whom he describes as "the masters of the sacred poem in English": George Herbert, Henry Vaughan, Christopher Smart, and William Cowper. Stressing the importance of "the plain style" in Christian poetry throughout the ages, Davie also includes a large selection of congregational hymns.

What is meant by 'Christian' verse? What must there be in a passage of verse thst gives us the right to call it 'Christian'? These are the questions discussed in Professor Davie's illuminating introduction and answered implicitly on every page of his collection of over 260 poems. This well-loved anthology embraces everything from the Anglo-Saxon 'The Dream of the Rood' to the works of modern poets such as T. S. Eliot, Sir John Betjeman, W. H. Auden, and John Berryman. Australian and American poetry appears alongside English, Anglo-Irish, Scottish, and Anglo-Welsh verse, and the book also includes a selection of congregational hymns. 'Fine poems abound in this book...should please, enrich and help a very wide readership' Catholic Herald

'Donald Davie has put together a fascianting anthology. There is much in this anthology to charm, to teach - and above all, to enjoy for all who read poetry - but especially the Christian reader.'Diana Good, The Door