Items related to The Physiology of Taste (Penguin Classics)

The Physiology of Taste (Penguin Classics) 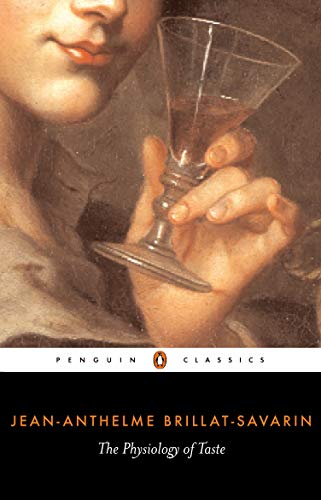 A book without precedent, skirting the line between recipe-book, memoir, history and philosophy, Jean-Anthelme Brillat-Savarin's The Physiology of Taste is edited with an introduction by Anne Drayton in Penguin Classics.

Brillat-Savarin's unique, exuberant collection of dishes, experiences, reflections, history and philosophy raised gastronomy to an art form. First published in France in 1825, this remarkable book reflected a new era in French cuisine: the advent of the restaurant, which gave the bourgeoisie the opportunity to select their dishes with precision and anticipation. Yet the author also gives his views on taste, diet and maintaining a healthy weight, on digestion, sleep, dreams and being a gourmand. Witty, shrewd and anecdotal, The Physiology of Taste not only contains some remarkable recipes, it an elegant argument for the pleasures of good food and a hearty appetite.

Anne Drayton's lively translation is accompanied by an introduction illustrating the remarkable nature of this work, by a man who was not a chef or an author but a magistrate in a French provincial town.

Jean-Anthelme Brillat-Savarin (1755-1825) was born in Belley, France, an area renowned for its food and wine. After graduating in law, Brillat-Savarin became magistrate of Belley and was later elected Mayor. During the French Revolution his life was endangered and he fled to other parts of Europe and then America, earning his living as a violinist in a theatre orchestra. He returned to France in 1796 and became a judge of the Supreme Courts of Appeal. He began compiling a book of meditations on gastronomy and in 1825, a few months before his death, published this brilliant treatise on the pleasures of eating: the culmination of a life-long love affair with food.

You can't properly call yourself a gourmand (or even a minor foodie) until you've digested Jean Anthelme Brillat-Savarin's delectable 1825 treatise, The Physiology of Taste: Or Meditations on Transcendental Gastronomy. Brilliantly and lovingly translated in 1949 by M. F. K. Fisher (herself the doyenne of 20th-century food writing), the book offers the Professor's meditations not just on matters of cooking and eating, but extends to sleep, dreams, exhaustion and even death (which he defines as the "complete interruption of sensual relations"). But as he proclaims in the initial Aphorisms: "The discovery of a new dish does more for human happiness than the discovery of a star," and Brillat-Savarin's genius is in the examination and discussion of food, cooking and eating. Chocoholics will be satisfied to know that "carefully prepared chocolate is as healthful a food as it is pleasant ... that it is, above all, helpful to people who must do a great deal of mental work ..." He examines the erotic properties of the truffle ("the truffle is not a positive aphrodisiac; but it can, in certain situations, make women tenderer and men more agreeable"), the financial influence of the turkey (apparently quite a prize in 19th- century Paris) and the level of gourmandise among the various professions (bankers, doctors, writers and men of faith are all predestined to love food). Just as engrossing as the text itself are M. F. K. Fisher's lively, personal glosses at the end of every chapter, which make up almost a quarter of the book. They are soulmates separated by centuries and Fisher's fondness for the Professor comes through on every page. As she notes at the end: "I have yet to be bored or offended, which is more than most women can say of any relationship, either ghostly or corporeal." --Rebecca A. Staffel, Amazon.com

Still the most civilized cookbook ever written.
"The New Yorker""

"Still the most civilized cookbook ever written."
--The New Yorker

THE PHYSIOLOGY OF TASTE (PENGUIN