Items related to Plato In 90 Minutes (Philosophers in 90 minutes - their...

Plato In 90 Minutes (Philosophers in 90 minutes - their lives & work) 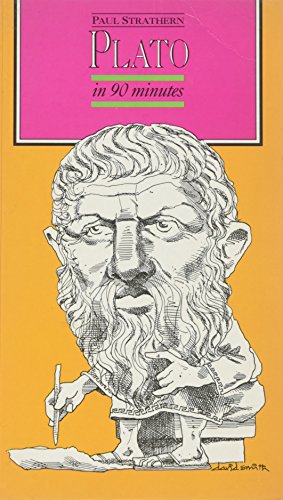 Well-written, clear and informed, they have a breezy wit about them...I find them hard to stop reading.--Richard Bernstein "The New York Times "

Each of these little books is witty and dramatic and creates a sense of time, place, and character...I cannot think of a better way to introduce oneself and one's friends to Western civilization.--Katherine A. Powers "The Boston Globe "

A godsend in this era of the short attention span.--Daryl Royster Alexander "The New York Times "

In an age when philosophers had scarcely glimpsed the horizons of the mind, a boy named Aristocles decided to forgo his ambitions as a wrestler. Adopting the nickname Plato, he embarked instead on a life in philosophy. In 387 B.C. he founded the Academy, the world's first university, and taught his students that all we see is no reality but merely a reproduction of the true source. And in his famous Republic he described the politics of "the highest form of state". In Plato in 90 Minutes, Paul Strathern offers a concise, expert account of Plato's life and ideas, and explains their influence on man's struggle to understand his existence in the world. The book also includes selections from Plato's work; a brief list of suggested reading for those who wish to push further; and chronologies that place Plato within his own age and in the broader scheme of philosophy.