Items related to Health Program Planning: An Educational and Ecological... 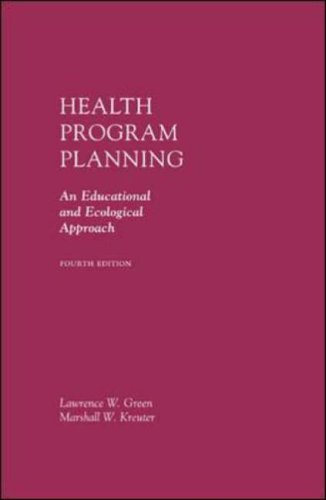 This classic text by the creators of the PRECEDE-PROCEED model provides a comprehensive overview of the principles and processes of health promotion planning. It is an invaluable up-to-date resource for students and practitioners in any discipline whose programs will include a significant health education or health promotion component. Each chapter includes references and extensive endnotes from the most current literature and is backed by the authors’ reputations as leading researchers and practitioners in the field.

Lawrence W. Green served on the public health and medical faculties of UC Berkeley, Hopkins, Texas, British Columbia, and is currently at the University of California at San Francisco as Program Leader for the Social and Behavioral Sciences for the UCSF Comprehensive Cancer Center. He has been a Visiting Professor at Berkeley, Harvard, Emory, the University of Maryland at College Park, the University of Maastricht in the Netherlands, the Shanghai Medical University in China, Lansdowne Scholar at the University of Victoria in Canada, and Chancellor’s Best Practices Scholar at the University of Newcastle in Australia. Dr. Green served the Carter Administration as the first Director of the Office of Health Information and Health Promotion, and the Clinton Administration as Acting Director of the Office of Smoking and Health at CDC. He retired in 2004 from CDC as Director of the Office of Science and Extramural Research. He received the highest awards of the American Public Health Association (Award of Excellence, the Mayhew Derryberry Award, and Distinguished Career Award), the American Academy of Health Behavior Research (first Research Laureate Medal), the International Union for Health Promotion and Education (the Doyen Jacques Perisot Medal), the American Association for Health Education (the Presidential Citation, the Scholar Award, and the Alliance Scholar), and the American School Health Association (Honorary Lifetime Fellow).