Items related to Habits of the Heart: Individualism and Commitment in...

Habits of the Heart: Individualism and Commitment in American Life 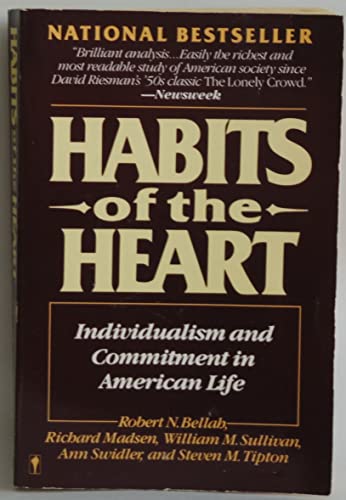 Meanwhile, the authors' antidote to the American sickness--a quest for democratic community that draws on our diverse civic and religious traditions--has contributed to a vigorous scholarly and popular debate. Attention has been focused on forms of social organization, be it civil society, democratic communitarianism, or associative democracy, that can humanize the market and the administrative state. In their new Introduction the authors relate the argument of their book both to the current realities of American society and to the growing debate about the country's future. With this new edition one of the most influential books of recent times takes on a new immediacy.

""Habits of the Heart is, rare among works of scholarly origin, an outspoken and even emotional plea for attention to an argument, and a danger. Its power is in the passion of its analysis, the vision of us . . . narrowing the gap between the inordinate rewards of success and the not less inordinate punishments for failure, in economic terms, in the society."--"Los Angeles Times

1. HABITS OF THE HEART: INDIVIDUALI

2. Habits of the Heart: Individualism and Commitment in American Life

3. Habits of the Heart: Individualism and Commitment in American Life