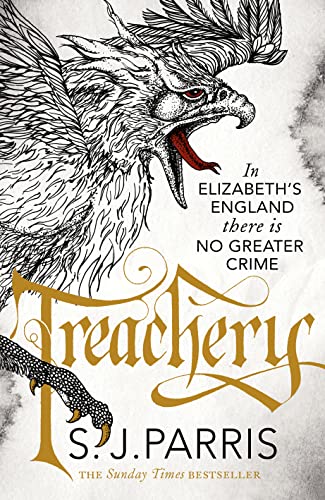 The No. 1 Sunday Times bestselling series

August, 1583. Giordano Bruno, a heretic fleeing the Inquisition, finds a new life working as a spy for Sir Francis Walsingham.

Along with his friend, Sir Philip Sidney, Bruno travels to Plymouth on the Queen’s behalf. There, they meet Sir Francis Drake, who is preparing to launch a daring expedition against the Spanish, which could turn the tide of war.

Unbeknownst to Bruno, however, Sidney plans to stowaway with Drake’s fleet and return a hero – dragging Bruno with him to the New World. But when a murder occurs aboard Drake’s own ship, fear and suspicion grip the fleet and threaten to abort the expedition before it begins.

Navigating the jealousies and loyalties of the crew, Bruno learns that someone with a deadly grudge is shadowing his investigation.

Tracking the killer through Plymouth’s menacing backstreets, he uncovers some of the darkest secrets the city is harbouring. Failure will come at the highest cost – not just for Bruno, but all of England...

Perfect for fans of C. J. Sansom and Hilary Mantel

‘Colourful characters, fast-moving plots and a world where one false step in religion or politics can mean a grisly death’ Sunday Times

‘Twists and turns like a corkscrew of venomous snakes’ Stuart MacBride

· ‘Hugely enjoyable... It’s played straight, but never humourlessly so, and there’s just enough “proper” history amid the intrigue to keep purists on side’ Guardian

· ‘With its twisting plot and vivid scene-setting, TREACHERY confirms Parris’s growing reputation as a writer of historical thrillers’ Sunday Times

· ‘An evil bookseller and a terrifying brothel lie ahead; what’s not to like? Gripping and fun’ Observer

· ‘Parris’s Giordano Bruno series has been a joy. Her Elizabethan England is loud, pungent and blessedly free of some of the genre’s more egregious clichés. She wears her research lightly: at home with the detail of the period, she is quite happy to engage in a little creative anachronism to bring the story home’ Telegraph

· ‘There are echoes of CJ Sansom’s Shardlake series here. But Parris is better than the usual run of imitators. Her prose is taut and compelling. Her wielding of the historical material is always convincing but never overwhelming’ The Times

‘This is historical mystery fiction at its finest’ Publishers Weekly

· ‘A brilliantly unusual glimpse at the intrigues surrounding Queen Elizabeth I’ Andrew Taylor, bestselling author of The American Boy

Book Description Paperback. Condition: Very Good. The book has been read, but is in excellent condition. Pages are intact and not marred by notes or highlighting. The spine remains undamaged. Seller Inventory # GOR005790787

Book Description Condition: Good. Ships from the UK. Former library book; may include library markings. Used book that is in clean, average condition without any missing pages. Seller Inventory # 8920073-6

Book Description Paperback. Condition: Good. Connecting readers with great books since 1972. Used books may not include companion materials, some shelf wear, may contain highlighting/notes, may not include cdrom or access codes. Customer service is our top priority!. Seller Inventory # S_312301283

Book Description Condition: Good. A+ Customer service! Satisfaction Guaranteed! Book is in Used-Good condition. Pages and cover are clean and intact. Used items may not include supplementary materials such as CDs or access codes. May show signs of minor shelf wear and contain limited notes and highlighting. Seller Inventory # 0007481209-2-4