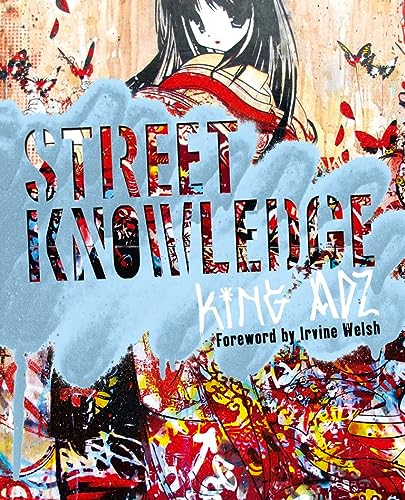 An encyclopaedia of street culture for those who love Banksy or Irvine Welsh and want to know about the cutting-edge talents, past and present, who have shaped urban cool.

This eye-catching insider's guide includes old-school graffiti legends, avant-garde street artists, film-makers, DJ's, designers, writers and poets who have influenced urban culture. From the ground-breaking New York artists of the 1980s to the unique work of modern-day Iranians – this book shows how street culture has penetrated every aspect of modern life.

Street Knowledge includes work and exclusive interviews from some of the world's most famous artists and talents, such as Banksy, David LaChapelle, Kelsey Brookes, Quik, Tony Kaye, Tama Janowitz, The KLF, Shawn Stussy, Obey, Irvine Welsh, Martha Cooper and Benjamin Zephaniah, as well as lesser-known and up-coming talents who are literally coming up from the streets to a gallery, cinema, clothes shop or mp3 player near you.

It also looks at the cities where all this is happening right now and gives the reader a mini city-guide to where the hottest spots are to be found and where to eat sleep shop drink and check out the freshest art, design and fashion. This is the first time there has been an in-depth look at street culture by a major publisher.

Literally too much going on within the pages of this unique book to do justice in one paragraph...

'The art and observations in The Urban Cookbook are more enticing than the recipes. But that is probably the point. King Adz has pulled together 50 recipes, 25 urban talents and five cities in this very hip city guide that would make a great
Christmas present.' The Observer

'A dazzling mish-mash of styles and points of view, Adz's volume succeeds as a visual travelogue of street art and cutting edge design.' Publishers Weekly

'Really great stuff. Quirky, idiosyncratic, but mostly it gave a great feel for the complexities of hip, web-driven urban culture.' Eric Hansen, author of Motorcycling with Mohammed talking about The Urban Cookbook.

'Eclectic interviews, street art, graphics, and photography with a truly global urban youth perspective (uh, no, not "urban youth" like pictures of 50 Cent posing with a cognac in Vibe magazine).' Fallon New York

'Colourful and vibrant, the book is illustrated throughout with original photography, giving the reader a feel for the street life of the featured cities. One of the most refreshing and innovative cookbooks out there, The Urban Cookbook
reminds us of the creative and community spirit that surrounds food.' Pimp Guides

'Just when you thought graffiti books were becoming a bit formulaic King Adz pops up with The Urban Cookbook which combines street food, art and style into one image packed volume. He takes the best of all three forms and mashes it all up intoa thoroughly enjoyable visual feast...King Adz really knows how to bring things alive with his obvious passion for the subject.' Art of the State

King Adz is a writer, photographer and filmmaker who specializes in all aspects of of street culture: Travel, Food, Talent and Stories. He writes a column in Huck Magazine (street sports & culture) and regularly contributes to Little White Lies (film magazine) both of which are award winning publications.

From 1996 – 2000 Adz worked as a creative director for agencies such as DDB, O&M and DMB&B all over the world creating work for the following brands; Levi's, Smirnoff, Nokia, Seagrams, Vodaphone/Vodacom, Teleflorist, Wrigley's, The BBC, The British Museum, Peacocks, AND 1, Total Sports,
Musica...

From 2000 – 2008 he was the founder, editor and creative director of 100proofTRUTH, a PDF that showcased and celebrated all diverse aspects of street culture.

From 2000 – present day Adz has worked as a film & video director creating commercials, music videos and documentaries for a diverse range of clients and he continues to create films to accompany all of his books.

The Urban Cookbook film was premiered at the 2008 International Amsterdam Film Festival.