Items related to Predictably Irrational: The Hidden Forces that Shape...

Predictably Irrational: The Hidden Forces that Shape Our Decisions 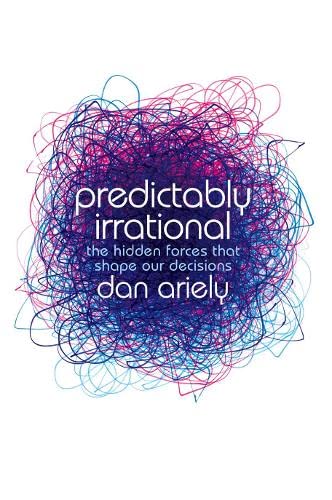 Why do smart people make irrational decisions every day? The answers will surprise you. Predictably Irrational is an intriguing, witty and utterly original look at why we all make illogical decisions.

Why can a 50p aspirin do what a 5p aspirin can't? If an item is "free" it must be a bargain, right? Why is everything relative, even when it shouldn't be? How do our expectations influence our actual opinions and decisions?

In this astounding book, behavioural economist Dan Ariely cuts to the heart of our strange behaviour, demonstrating how irrationality often supplants rational thought and that the reason for this is embedded in the very structure of our minds.

Predicatably Irrational brilliantly blends everyday experiences with a series of illuminating and often surprising experiments, that will change your understanding of human behaviour. And, by recognising these patterns, Ariely shows that we can make better decisions in business, in matters of collective welfare, and in our everyday lives from drinking coffee to losing weight, buying a car to choosing a romantic partner.

‘A marvelous book that is both thought provoking and highly entertaining, ranging from the power of placebos to the pleasures of Pepsi. Ariely unmasks the subtle but powerful tricks that our minds play on us, and shows us how we can prevent being fooled.’ Jerome Groopman, New York Times bestselling author of How Doctors Think

‘PREDICTABLY IRRATIONAL is wildly original. It shows why―much more often than we usually care to admit―humans make foolish, and sometimes disastrous, mistakes. Ariely not only gives us a great read; he also makes us much wiser.’ George Akerlof, Nobel Laureate in Economics, 2001 Koshland Professor of Economics, University of California at Berkeley

‘Dan Ariely is one of the most original and consistently interesting social scientists I know. His research covers an unusually broad range of topics, and in every one of them he has produced some distinctive findings and ideas. His methodological inventiveness is remarkable.’ Daniel Kahneman, Nobel Prize in Economics, 2002

Why do we splurge on a lavish meal but cut coupons to save twenty-five cents on a can of soup?

When it comes to making decisions in our lives, we think we're making smart, rational choices. But are we?

In this newly revised and expanded edition of the groundbreaking New York Times bestseller, Dan Ariely refutes the common assumption that we behave in fundamentally rational ways. From drinking coffee to losing weight, from buying a car to choosing a romantic partner, we consistently overpay, underestimate, and procrastinate. Yet these misguided behaviors are neither random nor senseless. They're systematic and predictable--making us predictably irrational.