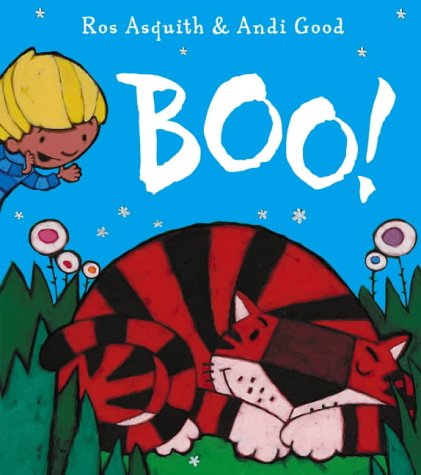 A boisterous rhyming story about a little boy overcoming shyness

A timid boy doesn’t want to play with the other children at a birthday party. Eager to prove to his mother that he’s not really shy, he hunts round the garden for a goose... Instead he finds a monster and creeps up behind it, shouting, ‘BOO!’ – but it’s not a real monster, it’s just a clockwork toy. Next he sees a tiger. But the tiger isn’t scared of him either – it’s really a cat. Gradually the boy builds up enough confidence to jump out on the other children, who are dressed as children, but they all tell him to ‘’Go away!’’. But they’re just teasing – they do want him to play with them really, and as a reward for trying so hard to join in, his mother has a special treat...a toy goose which the boy calls...BOO!

Ros Asquith has worked as a photographer and a theatre critic as well as a cartoonist. She is the author and illustrator of the bestsellling ‘Teenage Worrier’ series, and her cartoon strip ‘Doris’ appears in the Guardian

'What can you do when
you feel shy?
Creep up behind a
HUGE
FEARSOME
beast and yell,
'BOO!''