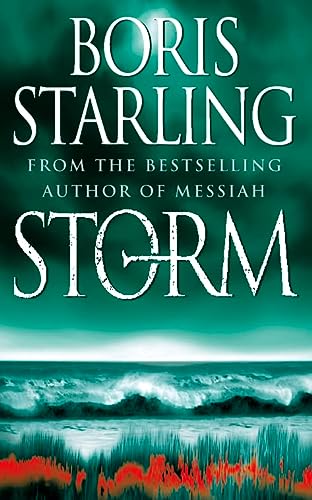 All our books are used but in good condition. All books checked carefully for damage before listing.EXCELLENT value for money and ready for dispatch using Amazons fufillment service.We believe you will be completely satisfied with our quick and reliable service. All orders are dispatched as swiftly as possible

Boris Starling's accomplished and harrowing second novel begins with a North Sea storm that causes a catastrophic ferry accident. Amongst the handful of survivors is Kate Beauchamp an off duty DCI who was planning a trip to Bergen with her Amateur dramatics society. A variety of figurative storms brew in the aftermath--the anger and alienation between Kate and her father, the torment of a tortured mind expressed through hideous violence, a corporate conspiracy--each leading to an eventual vortex that is both merciless and startling. It is Starling's expert rendering of these storms that provides an enticing core, as the action builds to a thrilling crescendo, which is marked by paranoia and desperation.

As DCI Kate Beauchamp conducts her investigation into vicious serial killings in the shadow of her recent trauma, an unexpected reunion with her estranged father (investigating the sinking) adds a welcome emotional frisson in to what could have been a standard murder mystery. This is reinforced as Starling probes the mind of Beauchamp's tortured quarry. This is no faceless madman, "Blackadder" is a tragic product of his own storm: he projects his pain through Greek Tragedies, with his victims as tempting Furies. In Beauchamp, Starling has fashioned a detective whose effectiveness lies in her unceasing drive and her incisive understanding of the criminal psyche:

If there were no consequences to be afraid of, then everybody would not only be evil, they would act evil. The only difference between us and [the killer] is that he is not sufficiently afraid of the consequences to stop himself.

Fast-paced and delivering gripping tension with excellent orchestration, Starling offers a magnificent tale that is conducted with grace and depth. --Danny Graydon Review: