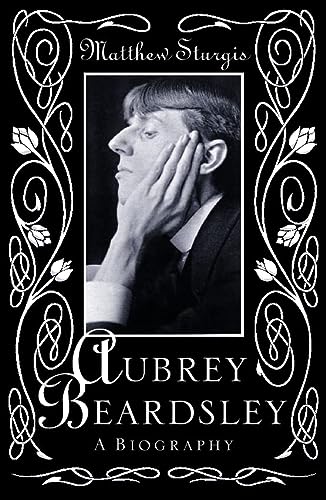 The first biography for 15 years of Aubrey Beardsley (1872-98), one of the greatest — and most distinctive — artistic geniuses this country has produced: a quintessential figure of the ‘naughty nineties’ and notorious friend of Oscar Wilde and Max Beerbohm. The book will be published in the centenary year of his death and supersede all previous works.

Beardsley, with his infamous reputation, tragic life and instantly recognisable style, is one of the paradigmatic figures of the Modern Age, who worked hard to fashion his persona. Fame, he knew, was the key. It is no surprise, therefore, that both Andy Warhol and Robert Mapplethorpe held him in high regard — the latter even collecting his work.

In this impressively researched and lucidly written new biography Matthew Sturgis has uncovered much fresh material and used many previously untapped sources to produce a compelling account of Beardsley's life – his shabby genteel childhood in Brighton and London, his close relationship with his sister Mabel, his inspiring school days, his miserable year in a London insurance office, his first discovery by Edward Burne-Jones, his sudden rise to fame as co-editor of both 'The Yellow Book' and 'The Savoy', his spectacular fall from grace in the wake of the Oscar Wilde scandal, and his anguished period of declining health.

Brilliant, witty and wilfully perverse, Beardsley achieved a fame that polarised Victorian opinion while forging a unique position for himself amongst the demands and attractions of the Pre-Raphaelites, Impressionists, Symbolists, literary Decedents and the applied arts movement. Beloved by Burne-Jones, cursed by William Morris, he was the intimate of Wilde, the rival of Whistler, the friend of Beerbohm, Sickert, Ada Leverson and William Rothenstein.

With his infamous reputation, short tragic life and instantly recognisable style, Beardsley is one of the quintessential figures of the Modern Age. He created much that was enduring, yet – as the author shows – perhaps his greatest creation was himself. His deliberate manipulation of press and public, his awareness of both art and the market-place, made him one of the first truly modern artists.

Beardsley, with his infamous reputation, tragic life and instantly recognisable style, is one of the paradigmatic figures of the Modern Age, who worked hard to fashion his persona. Born in Brighton in 1872 of lower-class parents and diagnosed a consumptive at the age of seven, Beardsley quickly established himself as a precocious talent. His erotic, decadent illustrations for Oscar Wilde's "Salome" set the tone of his style: by turn shocking, facetious and cruel. Elongated and androgynous himself, he was readily confused with his own degenerate pictures. Sex suffuses his art and accounts for the mixture of fascination and horror with which his pictures were viewed by contemporaries.

Book Description Hardback. Condition: Very Good. The book has been read, but is in excellent condition. Pages are intact and not marred by notes or highlighting. The spine remains undamaged. Seller Inventory # GOR001471567

Book Description HarperCollins, 1998. Hardcover. Condition: Used; Very Good. Dispatched, from the UK, within 48 hours of ordering. Though second-hand, the book is still in very good shape. Minimal signs of usage may include very minor creasing on the cover or on the spine. Seller Inventory # CHL5453287

Book Description Harper Collins, 1998. Condition: Good. First edition. Ships from the UK. Shows some signs of wear, and may have some markings on the inside. Seller Inventory # GRP114746933

Book Description Harper Collins, 1998. Condition: Good. First edition. Ships from the UK. Former Library book. Shows some signs of wear, and may have some markings on the inside. Seller Inventory # GRP57646369

Book Description Harper Collins, 1998. Condition: Good. A+ Customer service! Satisfaction Guaranteed! Book is in Used-Good condition. Pages and cover are clean and intact. Used items may not include supplementary materials such as CDs or access codes. May show signs of minor shelf wear and contain limited notes and highlighting. Seller Inventory # 0002557894-2-4

Book Description HarperCollins 1998-03-16, 1998. Hardcover. Condition: Very Good. All books are pre-owned and will have been read by someone else before you. They may well show signs of minor wear and tear. Please note, cover images are illustrative only, and the actual book cover and edition can vary. Seller Inventory # 9780002557894-21

Book Description HarperCollins, London 1998, 1998. 24.0 x 16.0cms, 404pp, b/w illusts, very good+ hardback & dustwrapper This book argues that Beardsley's grestest creation was himself because:' his deliberate manipulation of press & public, his awareness both of art & the market place, made him one of the first truly modern artists'. Seller Inventory # 147477