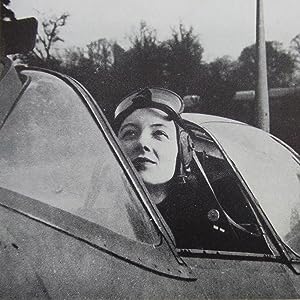 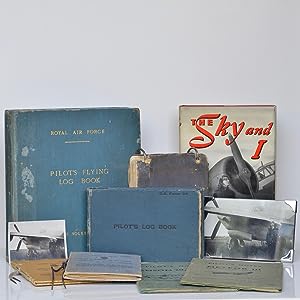 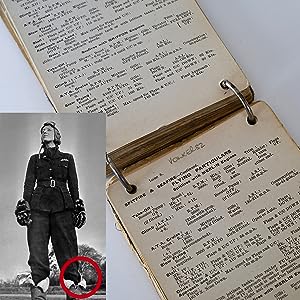 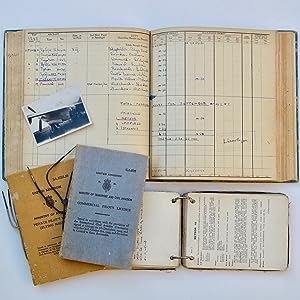 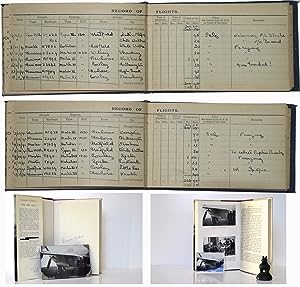 1939-1965: "I could not contemplate any other job. Flying has become such an integral part of my life that it is almost impossible to imagine existence without it. I should hate to think that I should never again emerge into the bright sunshine of the world above the clouds, leaving behind [.] the pettiness of everyday life." [The Sky and I, 1956, p.196]. An important group of documents relating to Veronica Volkersz [nee Innes] 1917-2000, former beauty queen who joined the ATA as a Second Officer in March 1941, one of only 166 World War II female ATA pilots (against 1,152 males) tasked with ferrying all types of military aircraft between airfields, factories, repair depots and maintenance units, flying without radios and unarmed in all weathers and often hostile skies. Logbooks comprise Veronica's first (CA Form 24) 1939-43 commencing with Civil Air Guard training in De Havilland Gypsy Moths at Marshall's airfield in Cambridge, her first solo flight recorded 13.02.39, first solo flight in a Spitfire recorded on 12.12.41. On 12.11.41 whilst flying Hawker Hurricane Z2642 from Cowley to Hullavington she remarks: 'Guns Loaded!' Veronica's subsequent logbooks (RAF Form 414) have been bound together by her into a single volume c.1941-65. She qualified for all single and twin-engined types and her logbook entries detail the wide variety of aircraft flown; Spitfires, Seafires, Hurricanes, Mustang, Tempest, Typhoon, Battle, Fulmar, Swordfish, Avenger, Walrus, Wellington, Whitley, Blenheim, Beaufighter, Mosquito, Mitchell, Oxford and Anson. About sixty types in all. Veronica Volkersz was the first woman to pilot an operational jet fighter, ferrying Meteor EE386 from the Gloster factory at Moreton Valance to 124 sqn at RAF Molesworth, September 15th 1945. As usual she was offered no conversion course, no cockpit instruction or helpful hints, just handed a printed card for the Meteor III to add to her Ferry Pilot's Notes, the occasion is underlined in red in her logbook. One of the women's many achievements was their successful lobbying for the same rate of pay as men of equivalent rank, they eventually flew every aircraft type operated by the RAF and Fleet Air Arm. 20 women died in service. The names of her colleagues appear throughout these logs as signatories, passengers or co-pilots: Pauline Gower, Joan Hughes, Monique Agazarian, Jackie Sorour, Margot Gore, Mary de Bunsen, Anna Leska, Anne Walker, Maureen Dunlop, Constance Leathart, Mary Hunter, Diana Barnato Walker, Grace Stevenson, Rosemary Rees and many others. In 1956 she was one of the first female ATA pilots to publish a memoir and she continued flying military aircraft in a post-war world replete with highly-experienced male pilots; ferrying five Hawker Tempest II fighters to Pakistan between January and July 1949, her military contract flying always interspersed with piloting commercial pleasure flights in Austers and Rapides. Between 1952-53 she flew Spitfires, Oxfords and Mosquitos in fighter control, searchlight and radar exercises over the North Norfolk ranges. In 1954 she resumes flying Oxfords and Ansons for the FCU until 1956 when she again flew Mosquito 35s and T3s on on target tows and FCU work until September 1958. In her regular post-war military contract flying she was unique, the only woman to do so. In November 1958 a near twenty year arc completes and we find her flying De Havilland Tiger Moths on an Instructor's Course at Marshall's Cambridge Airport, where she herself had learnt to fly in 1939. Her last log book entry is a private flight in an Auster from Shoreham to Cranfield, on September 26th 1965. Veronica May Volkersz never remarried post-war, she died in Cambridge on December 13th 2000 at the age of eighty-three. The entry on her Death Certificate describes her occupation thus: 'Aviator (retired)'. Seller Inventory # 3003


If you require priority or courier delivery please advise directly, otherwise all shipping costs and transit times are as stated. Drop shipping by prior arrangement only.