Home › Andreas Vesalius' Fabrica: The Anatomy of a Revolution

Andreas Vesalius' Fabrica: The Anatomy of a Revolution 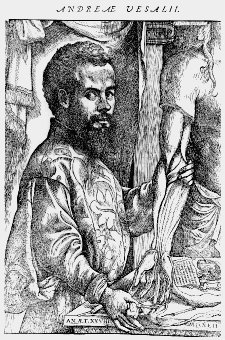 In 1543, Belgian physician Andreas Vesalius, then just 28 years old, published one of the most influential books in medical history. The seven-volume tome also happened to be a work of art and a marvel of Renaissance book production. Vesalius' De humani corporis fabrica (On the Fabric of the Human Body), affectionately known as The Fabrica, has stood the test of 500 years of time to still be referenced and reproduced often in modern culture.


In an era when physicians were typically "hands off", observing from the sidelines while surgeons and underlings did the work, Vesalius was unique in his absolute refusal to leave any stone unturned. He burned with a need for certainty and detail, and insisted he investigate the human body himself, often up to the elbows. In his fevered pursuit of answers, he robbed graves, snatched bodies, and was once nearly caught boiling human bones by a landlord. In a time when human dissection was considered taboo, Vesalius railed against the social morés, and continued with his corpses. It may sound like the macabre and morbid hobbies of a serial killer, but Vesalius was not so interested in death as in life. What made the human body function? How did it work, this spark to life, and all of its interconnectedness? That inextinguishable curiosity, combined with a rebellious nature, would produce one of the most timeless and influential books on human anatomy the world has ever known.

The concept of The Fabrica began earlier, in 1538, when Vesalius published a collection of his anatomical woodcuts, titled Tabulae anatomicae sex. He made them available to his students, in oversized poster form, to help them study the body in detail, particularly when no corpses were readily available. Next came The Bloodletting Letter of 1539, which Vesalius published in support of the practice of bloodletting. The so-called Venesection letter detailed his beliefs that, contrary to popular practice of blood collection at the time (in which the practitioner collected blood from a site near the injury or ailment), blood should actually be collected from a separate point of the body, far from the source of the malady.

The Venesection letter served to further mark Vesalius as a rebel and an independent thinker. Before Vesalius, the works of leading second-century Greek physician Aelius Galenus (better known as Galen) had gone almost wholly uncontested and accepted as gospel. But Vesalius was a man rarely satisfied. Galen's anatomy discoveries had been based on animal findings; Vesalius himself would use only human. He addressed many of Galen's claims, expanding on some and outright refuting others.

Early in 1543, Vesalius publicly conducted a dissection of a human corpse (that of infamous Swiss criminal Jakob Karrer, beheaded for attempted murder of his wife). Post-dissection, he reconstructed Karrer's skeleton and donated it to the University of Basel. Known since as "The Basel Skeleton", the remains can be seen today at the world-class anatomical museum in the Institute of Anatomy in Basel, Switzerland. 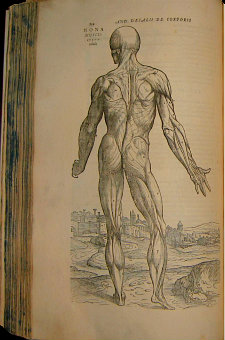 The 1555 edition of The Fabrica

Later that year, having realised the popularity of his anatomical drawings (many of which had been reproduced without his permission), Vesalius sent the first iteration of The Fabrica off to his printer, Johannes Oporinus. But he was an exacting, fastidious and eccentric creature, and when he sent the manuscript, it was accompanied by a stern warning to Oporinus to not even slightly alter any tiny piece of text, and to remain 100% accurate and faithful throughout. Despite all accounts supporting the printer's success in that regard, Vesalius was disenchanted when he received the finished product, and immediately began work on the second edition of the Fabrica, this time with annotations.

Vesalius was so passionate and determined, and felt so misunderstood by other medical practitioners and the community at large, that he was prone to fits of rage and burned much of his work, beginning again and again.

Members of the AbeBooks Marketing team were recently fortunate enough to have the opportunity to see and even touch a copy of the 1555 second edition of The Fabrica (pictured at right), and hear a talk about it by Hélène Cazes, who is a Professor of French at the University of Victoria, as well as the the Director of their Medieval Studies Program. Cazes is also Vice-President of the Canadian Society for Renaissance Studies. The Fabrica was a very generous gift to the Special Collections & University Archives at UVic, by a private donor. During the media portion of our visit, we were allowed to see the book up close, and I was fortunate enough (after ensuring my hands were spotless) to even touch the book, gingerly turning its pages. While doing so, I was aware of the age of the pages and their likely fragility, but they felt quite sturdy, and more like fabric than modern paper. The bottom edges of the pages were slightly charred, indicating the book had been through a lot in its 450+ years on Earth. It smelled a bit sour, a bit musty, a little bit like pine and a little bit like cardamom. I was pleased to be among a group of such people that when I sniffed the book, very few eyebrows were raised. It was a rare treat.

Cazes spoke very passionately and at length about not only The Fabrica, but also Andreas Vesalius himself. While she made it clear that his genius, determination and innovation could not be overstated, she was also forthcoming about his personality:

"Vesalius was a rare talent, especially for one so young, but I cannot say I would wish to meet him. No, though it is impossible to ignore his contributions and his rebelliousness, I would not want to share a dinner party with him."

Still, while the meticulous and eccentric Vesalius gnashed his teeth and tore his hair over the quality of his work, which he found always wanting, history was quietly being made. The Fabrica has been called the book that sparked the scientific revolution. Its art depictions are still widely used today, in medical textbooks, on medical web sites, and places you would least expect.

The second edition was very heavily revised, with hundreds of alterations to the text, both stylistic, for clarity and comprehension, as well as for content and context. Vesalius had continued to study and work and learn, and many of the changes to the 1543 edition were changes to his own assertions, which he now knew to be incorrect. 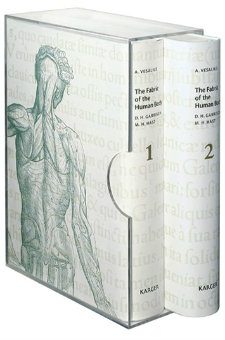 The second edition of The Fabrica, heavily annotated and more to Vesalius' satisfaction than the first, was published in 1555. It is widely believed that Vesalius' intention was to publish an eventual third edition, which never came to pass. Until, that is, 2013, when S. Karger Publishing released an enormous, luxurious, two-volume edition of The Fabrica (pictured at left). Now in English (previous editions were of course in Latin), and with use of color and miniature portraits throughout, the aim of this new, so-called "Third edition of The Fabrica" was to make the material more accessible, and bring Vesalius' work and art to life once more. The coffee-table sized volumes are glossy and gorgeous, with the text of both the 1543 and 1555 editions painstakingly translated, and all the wonderful woodcut pieces are present, enhanced only as necessary for ultimate quality, perfect for display in a doctor's office. The new technology allows for much more detailed looks (zooms, for instance) at the wonderful and already detailed art throughout.

Interestingly, while much has been made (justifiably) of the book's influence on how the human body is depicted, how anatomy books are presented, and how medical research is carried out – there is some question as to the book's contributions to actual medicine. Vesalius got plenty wrong, as we now know, nearly 500 years later. His work contained assertions that the heart was not a muscle at all, but in fact had a small bone at its center. The kidneys definitely did not function as filters, as some had ridiculously suggested. And the nerves, from what he could surmise, served no real purpose whatsoever.

There is no disputing, however, that The Fabrica itself is a rare gift to the world, and a lasting tribute to curiosity, invention and determination. Canadian physican (and co-founder of Johns Hopkins Hospital) Sir William Osler said it well:

"The worth of a book, as of a man, must be judged by results, and, so judged, the "Fabrica" is one of the great books of the world, and would come in any century of volumes which embraced the richest harvest of the human mind."

Cazes agrees, as do most bibliophiles, collectors and medical students to come across The Fabrica. We were lucky enough to capture a few minutes of Cazes' time after the talk – enjoy our video (after the images), and a glimpse inside one of the most beautiful, detailed and influential books of human anatomy to ever exist.

Anatomical Images from Inside the 1555 Fabrica: 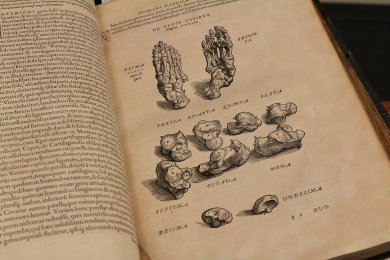 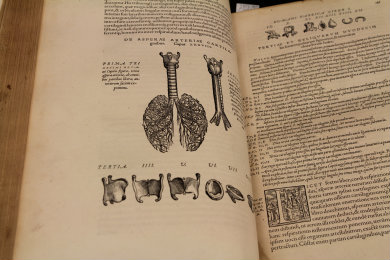 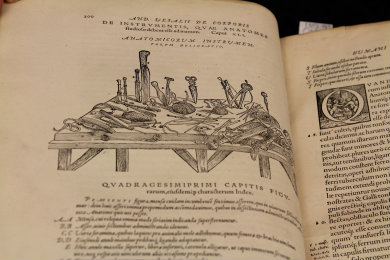 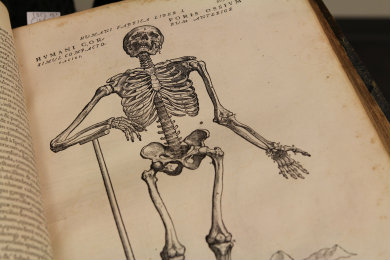 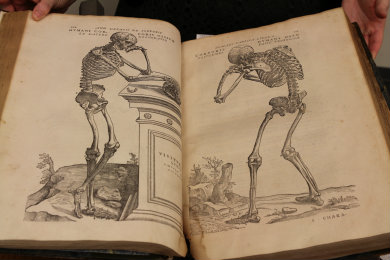 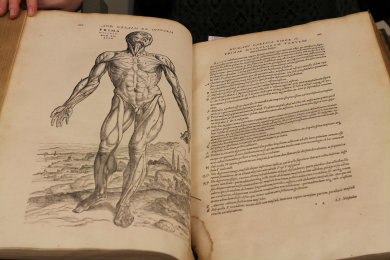 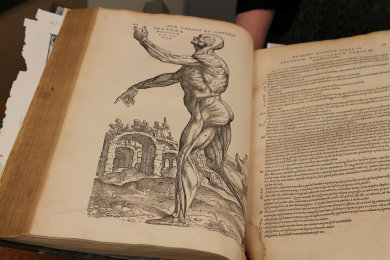 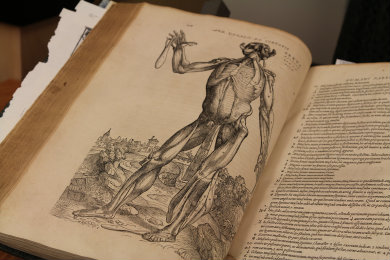 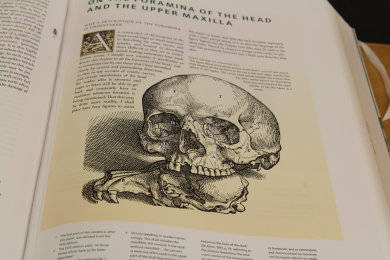