Items related to Ancient Africa - 2 Books in 1: African Mythology and... 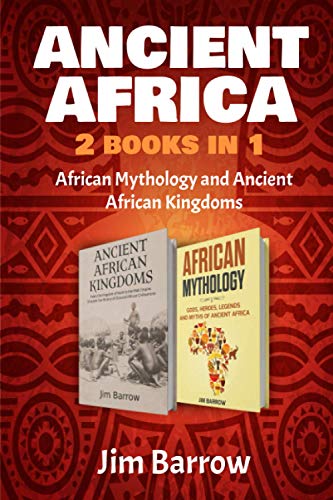 Book Description Paperback. Condition: New. Language: English. Brand new Book. The Lesser Known Side of Ancient Africa: Dive Deep Into Africa's Rich History and Thrilling Mythology & Explore How the World as We Know it Today Was Influenced By Ancient African Kingdoms and CivilizationsDo you know that Africa is the oldest inhabited continent? With that in mind, both you and I, our parents, grandparents can be traced to African ancestors. One of the oldest and most advanced civilizations that ever existed - Egypt - also originated from Africa.Thanks to African people's unique beliefs and diverse cultures, today African rich history and captivating mythology are some of the most interesting subjects to explore. With more than 3000 cultures, they each have their own stories to tell.Would you like to: Explore Africa from a different aspect and indulge in a time travel experience through Africa's rich history? Find out how ancient African civilizations shaped the world as we know it today and see for yourself why African cultures are so influential? Discover the most popular, unbelievable African myths and legends that ancient African tribes came up with years ago? Hear the thrilling story of ancient Africa and the most famous Gods and Goddesses from the African continent?This unique bundle will take you on an exciting journey through the ancient African kingdoms and cultures while introducing you to Africa's rich blend of myths and legends. From pre-colonial kingdoms to the most powerful African civilizations that made their mark on history, these books shed light on ancient Africa!The bundle will grab your attention by discussing matters such as: Gods, heroes, legends and myths of ancient Africa including the most prominent mythology figures such as Ebele, Akoma Mba, Aiwel Longar, Bayajida, etc;The differences between areas and cultures in Egypt, South Africa, and Nigeria and their slave trade rules, colonization, immigration, and legends;The oldest civilizations in Central, North, Northeastern, Southern and West Africa including the Sao civilization, Egypt, Sudan, Ethiopia, Luba Empire, Mali, Ghana, etc;More than 20 African legends with animals or heroes as protagonists as well as creation myths and legends;Pre-colonial kingdoms of Africa and an overview of the Kingdom of Kush, the Land of Punt, Carthage, Kingdom of Aksum, Sahelian Kingdoms, Mali Empire;Ancient African kingdoms remains and the influence of other cultures and religions;And much more!If you want an insider look into African mythology and rich history, look no further than this bundle! The author does a great job of delivering Africa's complex and intricate character to the reader, so don't miss out on this unique opportunity to relive history! Scroll up, click on "Buy Now with 1-click", and Get Your Copy Now!. Seller Inventory # APC9798721828874