Items related to Overstanding Rastafari - Jamaica's Gift To The... 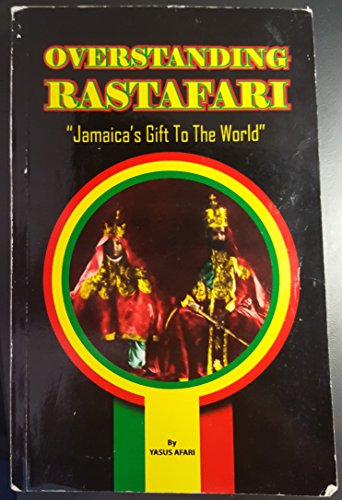 OVERSTANDING RASTAFARI Jamaica's Gift to the World , is written by well respected Jamaican author and personality, Yasus Afari, in response to the needs of students and other people who are interested in Rastafarian culture and messages. Yasus Afari brings his insight and objective sensitivity, coupled with his unique vantage point and over twenty three years as an active member of the Rastafarian Faith. Yasus Afari livicates (dedicates) this book to His Imperial Majesty Haile Selassie 1 and to the millions of African men, women and children who were treated inhumanely by the European nations and their agencies. In harmony with the Jamaican motto, Out of many one people, this book employs the tone of tolerance and overstanding that is vital to social harmony, self confidence and self esteem in the context of Jamaican identity, plurality and socio-economic reality. OVERSTANDING RASTAFARI explains the indigenous response of Rastafari to the experience of slavery, as a movement started in the 1930's by descendants of the enslaved Africans who had been abused in Jamaica. OVERSTANDING RASTAFARI introduces the roots and development of Rastafari, one of the newer and fast growing faiths in the world. OVERSTANDING RASTAFARI explores and lends much clarity within the twenty one chapters of the book. Starting with The People of Jamaica and Who is Rastafari? the book goes on to explore: Values, Ethics: Concepts and Beliefs, Language and Music, Food and Nutrition, Reparation and Repatriation, Rastafari and Christianity, Gender Relation, Global Vision and the Way Forward. Author, Yasus Afari is one of Jamaica s best known Rastafarian Dub Poets and is also a music producer and promoter of Reggae artists, favouring Roots Reggae , the lyrically conscious political form of reggae, which has more recently been realigning itself to traditional Rastafarian values. His well received CD Revolution Chapter 1, was released as an option in a twin audio/visual package with OVERSTANDING RASTAFARI, and features his mantra JAH is the essence of my life. OVERSTANDING RASTAFARI is an essential reference book, now available through Learning Links International.

...merely to say that Overstanding Rastafari is an authentic source does not do justice to what is indeed a rich compendium of the principles that guide the development and spread of Rastafari. Of even more striking significance is the interpretive brilliance of the remarkable philosopher that is Afari...his explanation of the singularity but at the same time the plurality of the divinity of Rastafari is a theological tour de force second to none. All Jamaicans should consider themselves indebted to the author for increasing our knowledge of self...we have created yet another gift to the world. --Professor Barry Chevannes, C.D. - University of the West Indies.

Overstanding Rastafari is the articulate expression of aspects of the experience, livity and meaning of Rastafari as an open-ended root searching, identity constructing redemptive and epistemic mode of free sovereign human, written by Yasus Afari. And who better, at this time to extend the narrative on Rastafari than one of its own voices, the notable Yasus Afari. --Dr. Clinton Hutton - Lecturer in Political Studies, University of the West Indies.

Yasus has offered us in this volume a most comprehensive compendium of Rastafarian history, culture and belief. Usually, the people who write about Rastafari are not Rastafarian. --Ian Boyne - Gleaner columnist and talk show host.

Yasus Afari is Jamaica's national treasure and is often described as Jamaica s best kept secret. However, this best kept secret is rapidly becoming public knowledge within the international community. Deeply rooted in his Rastafarian Faith, Yasus is a Dub Poet, Author, Philosopher and Reggae Artiste of unprecedented insight and inspiration. Yasus is one of the original Christian Souljahs who engineered the Cultural Renaissance in Reggae and Dance Hall music and the Dance Hall culture in the early 1990's alongside other Rastafarian artistes such as Garnet Silk, Tony Rebel, Everton Blenda, Uton Green, Luciano, Buju Banton, Sizzla, Capleton and Louie Culture among others. The 1990's and beyond, witnessed Yasus Afari touring the world (including North and South America, Europe, Africa and the Caribbean) as well as recording with the likes of Black Uhuru, Toots and The Maytals, Freddie Mc Gregor & Beres Hammond. Thereby enhancing his international profile and expanding his horizons and the Revolution in Dub Poetry. During this time Yasus received numerous awards and unprecedented accolades and was featured in many publications including gracing the cover of the Billboard Magazine. He also managed to produce his own music as well as that of other artistes and promoted several ground breaking and successful stage shows. His main poetic showcase is called Poetry in Motion, which is an annual event celebrating Jamaica's rich poetic heritage. In 1996, Yasus visited Ethiopia at the invitation of the Ethiopian government and people to celebrate the centenary of the battle of Adwa. In 1998, Yasus visited Ghana at the invitation of the Ghanaian government to take part in Panafest with other performers from over 30 countries around the world. In December 2009 Yasus Afari was honoured to attend the Parliament of the World's Religions in Melbourne. Australia, as an Ambassador of the Council for the Parliament of the World's Religions to make a presentation on Rastafari: The Livity of Spirituality along with performances for delegates and local people. The response was overwhelming and Yasus is continuing to support the Parliament of the World's Religions initiatives. Check out more about Yasus Afari at www.yasusafari.biz.

Book Description Senya-Cum, 2007. Soft cover. Condition: Good. No jacket. Inscribed by author. Clean throughout aside from one or two pages in cooking section with minor stains. Minor shelf wear on covers and spine. Seller Inventory # 1120968

Book Description Senya-Cum, 2007. Paperback. Condition: GOOD. Has little wear to the cover and pages. Contains some markings such as highlighting and writing. Seller Inventory # 9766107785_abe_gd

Book Description Senya-Cum, 2007. Paperback. Condition: VERY GOOD. Pages are intact and are not marred by notes or highlighting, but may contain a neat previous owner name. The spine remains undamaged. Seller Inventory # 9766107785_abe_vg