Items related to To the Lighthouse (Modern classics)

To the Lighthouse (Modern classics) 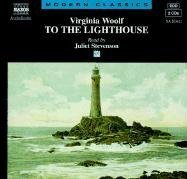 To The Lighthouse is Virginia Woolf's most accomplished novel, and her most autobiographical. It tells of one summer spent by the Ramsay family and their friends in their holiday home in Scotland. Offshore stands the lighthouse, remote, inaccessible, and external presence in a changing world. A projected visit to the lighthouse forms the heart of this extraordinary novel which, through the minds of the various characters, explores the nature of time, memory, transience and eternity. The style has the clarity of a diamond which shimmers in the mind, making To The Lighthouse one of the most unforgettable novels of the twentieth century.

This classic character study takes on a new lease of life with Juliet Stevenson's masterful narration. She lends cohesion to the stream-of-conciousness passages, making them easier to follow. As Mrs Ramsay and Lily Briscoe explore live's questions, Stevenson applies vocal traits to each character, reflecting personalities and values. Both women speak in clear, kind tones, while gruffness captures Mr Ramsay's essence and sarcasm dominates Mr Tansley's. Light, airy notes accompany the children's words. Young James Ramsay's lighthouse journey and Lily's painting of Mr Ramsay tie the book's opening to the conclusion ten years later. Longed for in the beginning, both the endeavours are completes in the end, bringing resolution to the characters' inner struggles. --AudioFile 2008